I've been reading a bit more about the ECHO approach to gardening that I've been using this season, and I came across on Wikipedia (that amazing resource for the curious and vigorous of mind) the concept of Permaculture, which is an expansion of mulch gardening. The basic premises of permaculture are summed up here:

The key to the permaculture garden is to create a thick mulch which blankets the entire garden area. This mulch can consist of many types of materials. Some materials which were listed were straw, chipped bark, stable sweepings, lawn clippings, sawdust, newspapers, cardboard, leaf mold, seaweed, cocoa beans, rice hulls, pine needles, nutshells, clothing, stones, old carpet, and roofing underfelt. Ruth Stout, one of the people using the permaculture method referred to it as the "no work garden." She considers digging soil or turning compost heaps a waste of energy and pointed out that the composting process occurs naturally throughout her garden as the thick mulch decomposes. Another advocate of the permaculture method is Masinoba Fukuoka, author of "The One Straw Revolution." He claims that the best ways to garden are found by observing nature. When gardening, he uses no digging tools and returns all plant residues back to his mulch, which he keeps at least six inches deep. He states a good mulch will "suppress weeds, return moisture, encourage earthworms, shelter beneficial microbes, and enhance tilth." Bill Mollison, a native of Australia, coined the phrase permaculture and promotes the ideals of this method. He claims that by creating a thick mulch one can start a low input sustainable garden even in places that have never been gardened before. He promotes no tillage and starts his garden plot by laying down a layer of wet newspapers and then throwing table scraps, lawn clippings, and straw on top of the newspapers to a depth of six inches. He makes sure that all the existing vegetation is covered, thereby preventing weed germination. When the mulch is in place, Mollison is ready to sow. He tears a hole in the under layered newspaper, adds a handful of ripe compost, and completes the job by planting the seed or seedling in the small mound. He states that an average size home garden only takes him forty-five minutes to mulch and plant. That also takes care of weed control for the season. At harvest time, Mollison lets the most productive and vigorous plants go to seed and uses this seed to sow next season's plantings. He claims that in consecutive years a six-inch mulch of plant residues, much of which is produced by the garden, is enough to maintain the system from year to year. He points out that creating the mulch from degradable household wastes like newspapers or old clothes is a handy and environmentally sound means of disposal and makes the system sustainable through use of materials already on site.

But the concept gets made broader and more interesting yet with the approach to food growing called Forest Gardening, which extends the layering into the shrub, dwarf-tree, and fruit tree level: 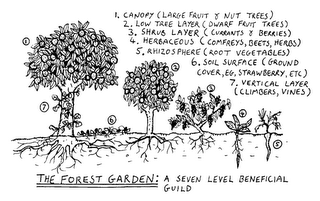 It's a wonderfully intuitive way to construct a garden — so intuitive that I was already planning to use it around the garden plot: I have a peach tree, blueberries (which get six or eight feet tall here), several dwarf citrus (on Flying Dragon rootstock, so they are no more than eight feet), Muscadine grapes that I'll trellis along the thirty-six inch fence I'm building around the garden, then pot culture of cukes and peppers (and, when things warm up, tomatoes). When the cool season's over, around the fruit trees, blueberries and grape, I'm going to try out cowpeas (ones that don't attract nematodes), and asparagus peas as a cover crop/green manure/food crop during the hot months... Hopefully I'll have a twelve-month garden.

Interesting site. I had a large garden in Md but was too daunted to start one here in s fla. Maybe I will change my mind- am thinking of relocating to the panhandle.