Out fussing about the garden, picking tomatoes and cukes just as the sun went down, I looked up in time to see a barred owl swoop across the yard and land in the huge magnolia that dominates our side lot. He stayed there long enough for me to get my wife and son out to see, then flew to a new perch on the privacy fence at the perimeter of our property. He heard our whispers and turned his head 180 degrees to stare right at us. I felt a slight urge, something deep, hardly mammalian, tell me to run when its eyes locked on mine -- his glassy eyes were dilated and so predatory. He blinked a few times, then silently glided off into the brush.

Though we live in the middle of DeLand, ours is an old neighborhood, platted in the early 1920s. The century old live oaks that shade the block provide a haven (and plenty of tasty squirrels) for hawks and owls.

Email ThisBlogThis!Share to TwitterShare to FacebookShare to Pinterest
Labels: birds 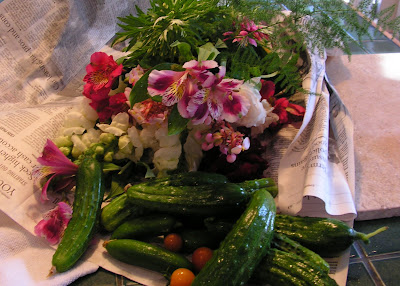 A bouquet I picked for my secretary for 'National Secretary's Day', along with some cucumbers from the garden. The flowers are a mix of Alstroemeria, roses, snapdragons and whatever filler caught my eye. I included a gardenia for aroma... That one bloom filled the office with that tropical, heady, sultry smell of gardenias... 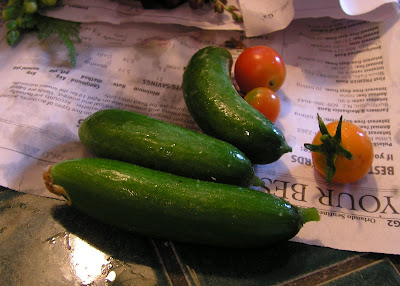 These are 'Cucino' cukes, an F1 hybrid that produces loads of finger-length cukes with thin skins and a dense, satisfyingly-melon interior. My kids love them. Oh, and some 'Yellow Currant' tomatoes. These have proved to be wildly and wonderfully vigorous. There are several hundred tomatoes already on a single plant. I'd call them more reddish than yellow, but they have a nice, typical balance of sweet and acid.
Posted by Michael at 10:07 PM 1 comment:

what's blooming in your garden? 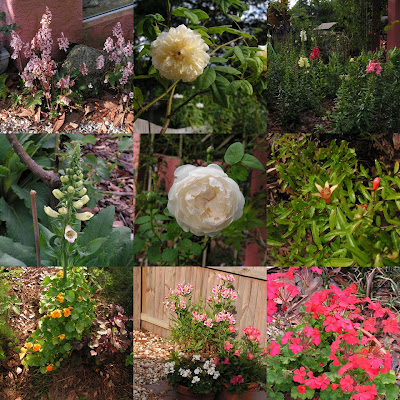 let's see here... starting with the upper-left and ending in the center: 'Dead Mickey's Begonia (fibrous root); 'Céline Forestier'; Snapdragons finally blooming (with some peonie poppies in the back there getting ready to bloom); blooms on my new pomegranate (thanks, castorp!); Perlagonium 'Sensation Cherry' that I grew from seed this winter; pots of Alstroemeria; some Nasturtiums -- these ruffled yellow ones didn't bloom much in the winter, but now they're excellent -- slightly scented, too!; Foxglove 'Foxie'; 'Glamis Castle' (an English, growing on its own roots)
Posted by Michael at 10:16 AM 1 comment:

Veg in the mid-spring garden 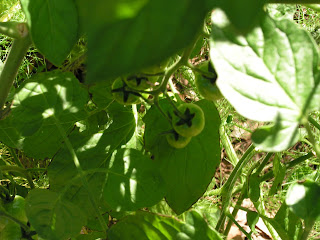 A Yellow Currant Tomato (from TGS), loaded with fruit. This has been an exceptionally vigorous, branching plant that set fruit early. 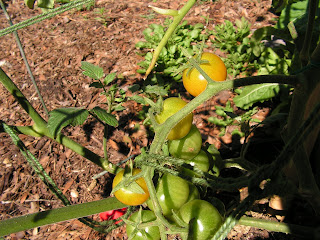 Ripening Sungold Tomatoes. Considered by many on the Florida GardenWeb to be the best tomato here in FLA. Quick to set fruit, quick to ripen. 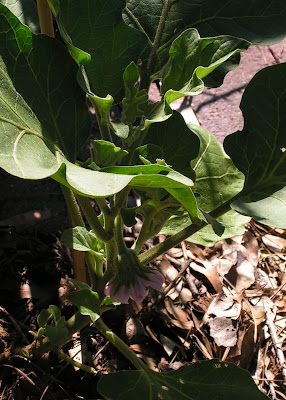 First flowers on my Black Beauty Eggplant.
Posted by Michael at 10:33 AM 1 comment:

I think I have a pretty good idea of what my summer garden will look like:

My cukes, chard, strawberries and blueberries are producing nicely. I have a small plot, so the yield every day is no more than a handful of this or that -- but it's a nice supplement to our household's larder.

We've more or less stopped buying veg from the grocer and now deal directly with our local organic growers, Lucky Gardens (aka Pauline's) and Planted Earth Farm.
Posted by Michael at 9:49 PM No comments:

Alan, my fellow blogger, answers my question about figgie sex...

Figs. I didn't see the flowers, but it must have flowers, right? Figs rule.

It did, but you wouldn't have been able to see them. Figs are a bit odd in their reproductive behavior in that their flowers are inside of the fruit. Fortunately the types of figs that we grow here in the Southeast do not need to have their flowers fertilized to set fruit.

There is a class of figs called "caprifigs" that do need to be fertilized for which there is a very special type of wasp that performs the pollen carrying function. Unfortunately the wasps don't survive here so caprifigs are largely confined to the Mediterranean-like climate areas of the world.

Email ThisBlogThis!Share to TwitterShare to FacebookShare to Pinterest
Labels: figs 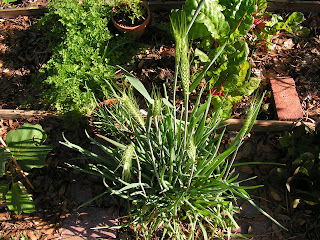 Egyptian Walking Onions with some wheat growing through it -- I used wheat straw as one of my layers in composting this winter. Not bright. I must have missed these sprouts. 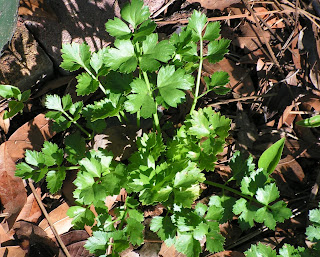 At the end of December, I planted Agina Cutting Celery (Pinetree). The leaves have an intense celery flavor. Slow growing so far, but a bit goes a ways... 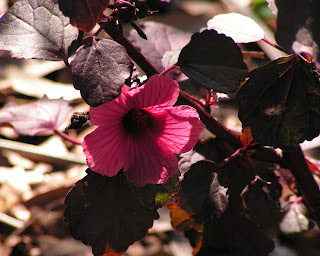 Hibiscus acetosella 'Red Shield'. I thought when I bought it that it was Roselle, which would have provided some berries in the fall. Very pretty plant in any case.
Posted by Michael at 10:26 AM 1 comment:

And the continuation continued... 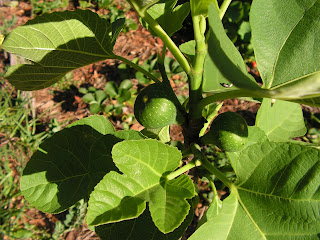 Figs. I didn't see the flowers, but it must have flowered, right? Figs rule. 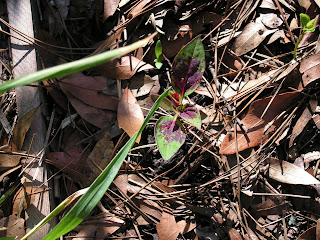 Quailgrass, a few weeks after I planted it. Fairly slow to germinate. 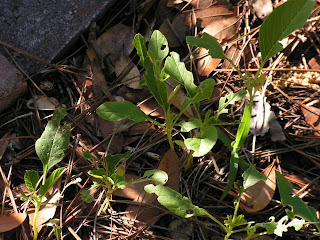 Edible Amaranth from ECHO. I think it's flea beetles, damn them, that have chewed the leaves. It will outgrow the problem, but it's tempting to open up a can of Sevin on their asses.. 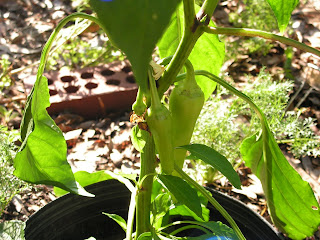 Yellow Banana Peppers.
Posted by Michael at 10:25 AM 1 comment: 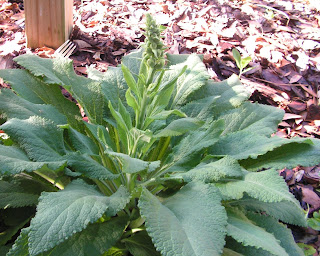 Foxglove 'Foxy' getting ready to bloom... 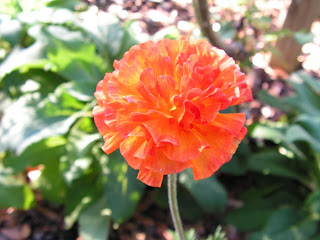 Ranunculus. Singularly beautiful, but very picky about water and temperature. I doubt I'll pant them again, or if I do, it'll be in pots: They must have full sun all winter, then a good deal of shade in April to bloom best. 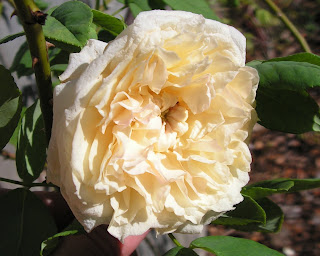 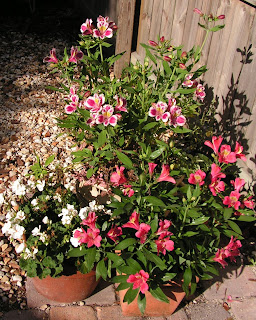 Alstroemeria and some plain-jane geraniums.
Posted by Michael at 10:24 AM No comments:

A garden update in pictures... 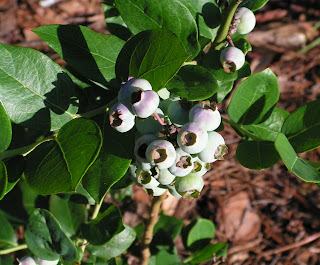 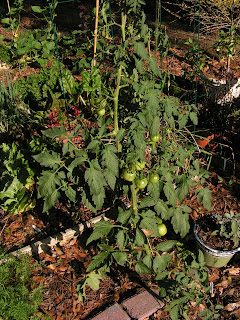 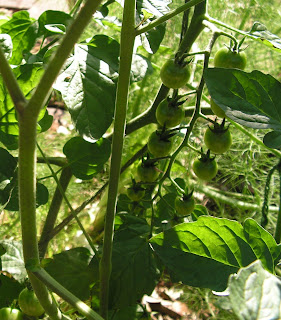 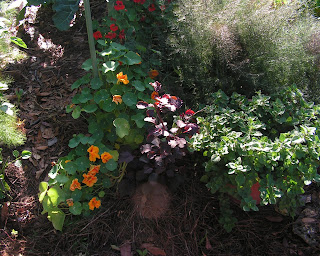 ...and Easy To Grow Bulbs taketh away. Good news on the income tax front allowed me to indulge in a bit of a consumer binge...
I've never grown Ecomis nor Sprekelia, but my Florida Gardener's Book of Lists tells me that they can be left in the ground year-round here. The Achimenes are great in pots -- they love all the heat and humidity FLA has to offer. I need some Caladiums to brighten up a shady part of my front yard, and the glads are fun.
Posted by Michael at 8:56 AM 1 comment:

Email ThisBlogThis!Share to TwitterShare to FacebookShare to Pinterest
Labels: bulbs 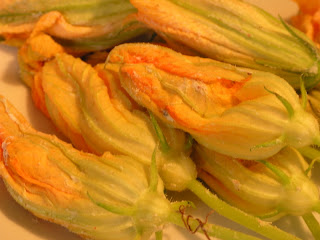 For about a dozen of Nize & Barbara's squash blossoms.

It looks more complicated than it is -- the whole thing can be thrown together in a couple stages, each taking a few minutes.

First, the filling. With a fork, mix the following:
Stuff the blossoms with a tablespoon or so of the cold filling. You can roll it into balls and just poke them into the blossoms. Twist the top of the blossom closed. Chill the blossoms until they are firm. 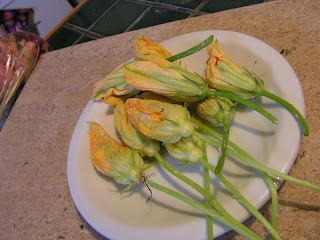 Now, you can do one of two things:
1) Once they're chilled, warm some nice olive oil or butter in a large skillet, and saute the filled blossoms until they go all golden. Serve on a bed of lettuce or cress with a French vinaigrette (1 part vinegar/citrus juice + 3 parts olive oil). Tasty and very easy. They make a perfect appetizer or even finger food.
2) If you want to go all fancy, mix up a batch of tempura: One egg, one cup of ice-cold water, one cup of all-purpose flour. Dump all these ingredients in a wide bowl, and use a chopstick to mix them batter. You want to incorporate all the dry ingredients but keep some lumps.

Over medium heat, warm a deep skillet full of peanut oil (or other oil, but it's the South, so use peanut oil!) to about 350 degrees. (Depending on how heavy your pan is, this may take a few minutes: A pinch of flour will immediately dance in the oil when it's hot enough). Quickly dunk your squash blossom into the batter, let it drain back into the batter a bit (it should be very well covered still), and toss it into the hot oil with it for a couple of minutes. Tempura should never brown, but the batter should be slightly crispy. 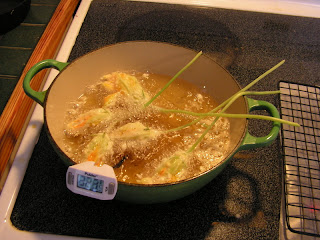 Serve them, as below, on a bed of mixed greens or cress or nasturium blooms and leaves and some vinaigrette. 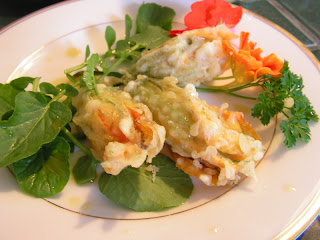 You'll have a lot of batter left over. and while the oil is hot, consider frying up some of B & N's other tasty veg, like green beans or collard greens or pea shoots. Dunk them all in the batter and toss them into the oil. Kids will love them dipped in soya sauce.
Posted by Michael at 7:21 PM 1 comment:

An Easter bouquet of Dietes, Rosa Laevigata, Chinese Wisteria, Freesia, blooms from a fibrous-root Begonia (Dead Micky's Begonia), Alstroemeria, and some Salvia Leucantha. I love Dietes in bouquets, but the bloom only lasts one day (in the vase or in the ground). Fortunately, most of my Dietes are huge and each stollon has multiple blooms, which continue to open for several days.

I usually work in a bunch of roses for my Easter bouquet, but I've won a Pyrrhic victory against a nasty case of Black Spot this year by severely pruning many of my roses. They're putting on lots of health growth now, but I'm several weeks off from cutting blooms. 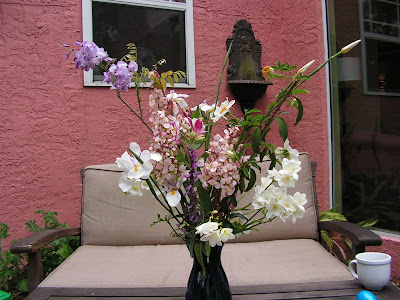 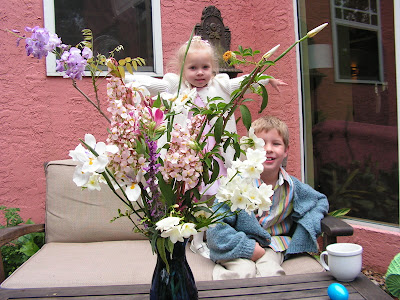 Posted by Michael at 3:46 PM No comments:

flowers-gardening - New York Times: "I GREW up with roses that were sprayed so heavily with pesticides that I probably risked my life sniffing them.

But there were, and are, alternatives to roses that need to be doused in deadly liquids. At a recent gathering of rosarians at the Brooklyn Botanic Garden, Wilhelm Kordes III, a fourth-generation rose breeder from Sparrieshoop, Germany, showed images of his latest disease-resistant beauties, grown with no pesticides, distinguished by sumptuous shapes and velvety petals.

Kordes roses (www.kordesroses.com) have been workhorses for decades: I have Dortmund, a cherry red climber, introduced in the 1950s, growing in my own garden. I don’t think I’ve ever seen a black spot on its tough, shiny green leaves. My father grew Crimson Glory, a hybrid tea introduced by Mr. Kordes’s grandfather, Wilhelm II, in 1935. But in Maryland, its satiny deep red petals needed plenty of postwar chemicals to keep the blooms perfect. Kordes dropped it in 2005, in favor of newer, more disease-resistant varieties.

Now, Earth Kind Roses, (earthkindroses.tamu.edu), selected by a kind of tough love research program started by Steven W. George at Texas A&M University, has a list of 13 roses that can withstand drought and heat and almost any kind of soil. And more roses are being tested in trial gardens around the country.

Marilyn Wellan, a past president of the American Rose Society, described the Texas A&M test site in Dallas, where 117 rose cultivars were planted “in the worst conditions,” she said. “They just put them in a hole, drip-irrigated the first year, and mulched with wood chips.”

“Those bushes were never sprayed, pruned or deadheaded,” Mrs. Wellan said. “By the end of the second year, all but 11 cultivars died.”

The survivors include 19th-century favorites like Mutabilis, a China rose, whose single petals open yellow, then deepen to orange and red; Perle d’Or, a peachy polyantha with a powerful scent; and Duchesse de Brabant, a pink cabbage-style rose with a tea fragrance, as well as modern shrub roses like Knock Out and Carefree Beauty.