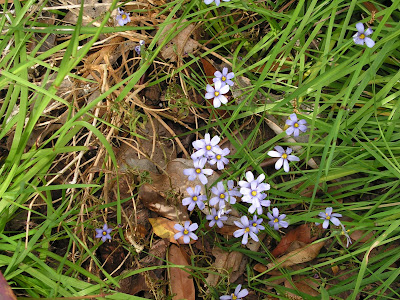 From the comments:
Given where I found it I probably don't have sufficient soil moisture for it at my place. Mores the pity.

It's been my experience that B-EG is very drought tolerant, thriving on neglect. I had a bunch of these in a ceramic pot, outside of irrigation, during the driest summer EVER in Central Florida, and they came through unscathed. Under irrigation, they spread quickly and are easily transplanted.

Email ThisBlogThis!Share to TwitterShare to FacebookShare to Pinterest
Labels: natives 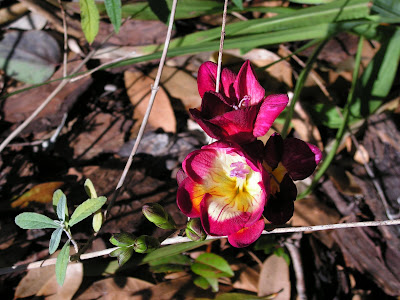 I noticed yesterday that my freesia has begun to bloom -- a cherry-red stalk from the freesia that I planted a year ago December. The new blooms are mixing it up a bit with a Buddleia here. Several other plants from the same batch are getting ready to bloom. I'd say about half the freesia I planted a year ago are back this season, about what I've come to expect in perennial bulbs here in FLA. Up north, of course, they'd have proliferated. Here many of them succumb to the heat, humidity, and excessively-drained soils.
Posted by Michael at 7:34 AM No comments: 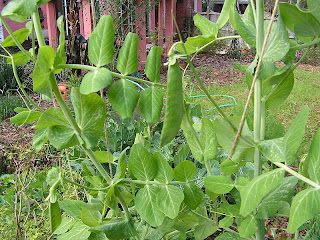 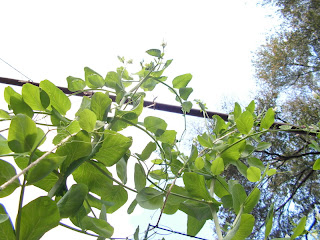 Pea vines ('Tall Telephone') have reached the top of my seven-foot frame. 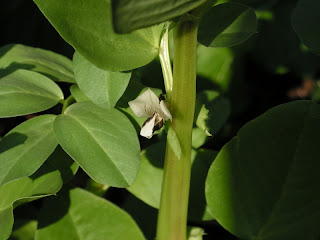 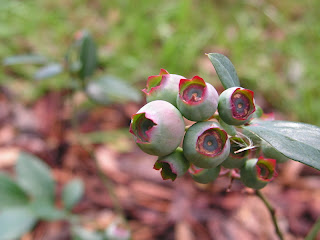 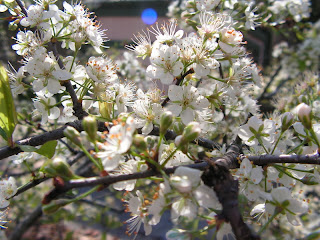 Chickasaw Plum blossoms.
Posted by Michael at 11:48 AM 1 comment: 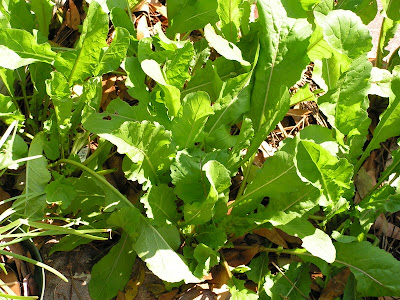 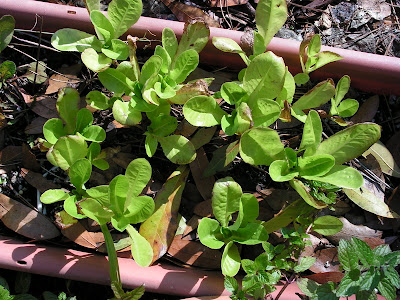 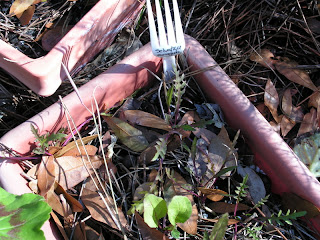 From a gardening standpoint, we have three seasons here in Florida: We have an extended fall, which runs from the first cold, dry airmass that hits Florida sometime in late October until the last frost date, sometime in February. Spring lasts from mid-February until the onslaught of the wet season, which starts most years the first half of June. Summer lasts until late October, etc. etc.

You can, with good timing and a little luck, grow really just about anything during fall and spring. For instance, I often buy mums in late October for a little color and to replace my summer annuals (zins, dahlias, tithonia). Those mums bloom for a couple of months, go dormant in December, and then, if I'm patient, will bloom again abundantly in March. I buy pansies and Johny Jump-ups in November, with the first sustained cool spell. They bloom constantly and reliably all the way until at least the end of May the beginning of May. Biennials like Foxgloves (Foxy) and Poppies, when planted in November and December, bloom in March and April. The "cold season" (November through the beginning of May) find my roses in full glory.

But our summer is a lot like the winter up north: Many plants -- flowering and vegetable -- cannot make it through June and July, and those that do usually die of fungal issues during September's combination of shorter days, hot nights and constant deluge. By October, I need those mums to add a life back to the garden.

Anyway, I've really been into the whole veg gardening thing. I've pulled pounds of Collards, tons of Rocket, bunches of carrots, turnips, lots of lettuce, some strawberries, fennel... Just recently, my peas have started to produce prolifically. My favas look to be not far behind.

I'm now ramping up my spring garden, with a couple dozen tomatoes, cucumbers, peppers, and various warm-season greens like chard and spinach hybrids. I expect to switch over to warm-weather gardening soon, pulling up the brassicas and cool-weather plants and replacing them with the Solanaceae (tomatoes, eggplants, peppers, etc.). I've got dozens of seedlings ready to transplant into my intensively-planted beds.

That phase of the garden, though, will come to an end in June. Fungal diseases, nematodes, insect damage and dry spells just make it not worth my while. What to plant then?

I ordered some vegetables for summer planting from ECHO, which should do pretty well here in Central Florida:
Descriptions of all these plants can be found here.
Posted by Michael at 7:16 PM 1 comment:

In Niger, Trees and Crops Turn Back the Desert - New York Times

In Niger, Trees and Crops Turn Back the Desert - New York Times: "Better conservation and improved rainfall have led to at least 7.4 million newly tree-covered acres in Niger, researchers have found, achieved largely without relying on the large-scale planting of trees or other expensive methods often advocated by African politicians and aid groups for halting desertification, the process by which soil loses its fertility.

Recent studies of vegetation patterns, based on detailed satellite images and on-the-ground inventories of trees, have found that Niger, a place of persistent hunger and deprivation, has recently added millions of new trees and is now far greener than it was 30 years ago."
Posted by Michael at 7:55 AM No comments: