Goings on in the garden...

Ah, another balmy, March-like day in December. This global climate change is great for the winter garden here in Central Florida, but I wonder at what price... My new dwarf citrus are blooming like crazy, a couple of months at least in advance of when they should be blooming. The Flordabell peach and all the blueberries continue to put out blooms. The Chandler strawberries have tons of fruit, as they should this time of the year. The Sweet Charlie berries that I got mid-December as bare-roots have put out ample and vigorous growth. The peas, sweet and garden, have grown a foot in two weeks, and the favas are going crazy. In roughly three weeks, they have sprouted and grown at least four inches. Some of them have put multiple shoots from the same bean. The Broccolini di Rapa that I planted a week ago in cells got transplanted into the garden, along with the spinach and chard from the first week of December.

I also finished off two small additions to the flower beds, again using the mulch method. The whole process has taken about a month: I started by sowing very heavily with annual rye, and then covering, lightly, the rye seeds with wheat straw. After about two weeks, I had a thick bed of rye and wheat growing up, along with some slightly composted hay. To that mix, I dumped several bags of leaves pilfered from neighbors' yards, and mowed the whole mess down to the ground with my mulching mower. The rye and wheat sprouted back, and I repeated the whole enterprise of leaves and mowing two wees later (last week), adding some garden waste from cleaning out beds (mostly Althernatera, which is lovely but too prolific...). Yesterday, I finished the project by mowing down everything, layering a bucket of alfalfa pellets upon that, then topping it all off with several layers of newspaper, to provide a weed block. On top of the newspaper, more shredded leaves and a thick layer of pine straw. The final result: About three inches of finely ground compost beneath the newspaper, and a couple of inches of growing medium on top of the newspapers.

To plant seedlings, I just shove the mulch aside, make a little tear in the newspaper (an arguable step, since the roots can penetrate the newspaper), add a handful of bagged compost, plunk down the seedling, draw the leaves and pine straw back into place, and move on. No shovel, no fertilizer, no nothing else. The first few times that I planted seedlings this way were pretty angst-ridden: Gardeners are so wedded to the "dig a hole, enrich the hole, plant the seedling" process that it was something of a leap of faith to just gently place a seedling on the ground.

But who can argue with success? 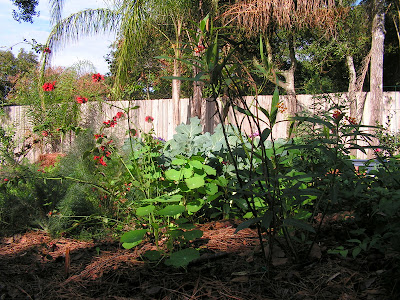 These weird temps we're having may be good but they're wreaking havoc in the garden. Here in Chicago you can be out with just a sweater and it's almost New Years. Some of my tulips are already popping up and I've seen on some forums that it's happening with people in various states.

I hope when winter really arrives here it won't hurt the plants so much. It may be an ugly spring. :0(

Shorts and tshirts in the middle of winter, you've got to love Florida :). I live in Starke, halfway between Gainesville and Jacksonville. I tried the newspaper weed blocker this past spring and still managed to have weeds sprouting up. I laid it about 4 sheets thick but maybe that wasn't thick enough. I agreed with you about the easy planting though.