My gardenias came into bloom last week. I have a love-hate relationship with them. I love them because they're low-maintanence, elegant plants with beautiful, pinwheel-like flowers and an exotic, tropical, seductive smell. I hate them because more than a few moments in the same room with them can be too much. (I have a bunch sitting less than a foot from me as I type, and I have breathe through my mouth.) As they bloom then decline, their scent goes from exotic to just plain slatternly and strident. What's more, they don't drop, and I have to deadhead them daily or my bushes are covered in brown, gnarly-smelling blossoms.
As white flowers that bloom during the dry period, they're also constantly under attack by scale and the subsequent black soot. (Scales, tiny insects whose excretions create the ideal medium for black, sooty mold, are attracted to white flowers, particularly magnolias and gardenias.) It's fairly easy to deal 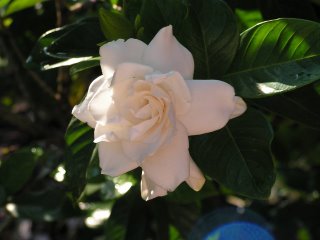 with the disease, though: Soap spray and a blast from my watering gun.
Interestingly, I bought two (genetically) identical bushes (grafted Miami Supreme) two years ago. One gets a lot more sun, and seems to suffer more from the scale and mold than the other, which is in partial shade. What's more, the one in more shade is generally healthier (thicker trunk, fuller shape), with deep green leaves and abundant blooms. Supposedly gardenias should be planted in full sun, but my experience indicates otherwise.
Posted by Michael at 4:32 PM 1 comment: 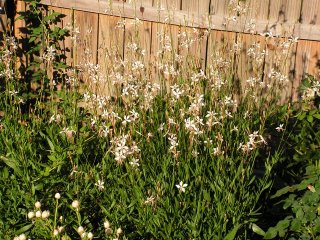 Gaura lindheimeri ("Dancing Butterflies") is a reliable herbaceous perennial here: One of the few plants that gets better every year. It's only OK as a cut flower (useful as a filler), but the bees and butterflies love it, and in my experience it's fairly drought-tolerant. It gets 8 hours of summer sun in my bed, and grows in such a way that it makes a wonderful companion for roses (pink or white).
Posted by Michael at 4:27 PM No comments:

The end of spring... 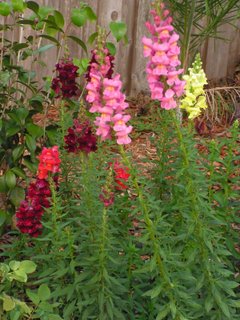 It's been much hotter than usual for this time of April: Every day for the last week, it's gotten up into the upper 80s, often with very dry air and typical Florida sun. My ranunculus had a few more blooms before giving up the ghost (they're very heat-sensitive). The freesia in partial shade continues to bloom, but I don't see any new spikes, so my guess is in a week or so, they'll be spent. They've performed remarkably well: They started to bloom on March 6, and six weeks later I'm still cutting flowers. I plan to buy a few dozen bulbs next year.

Some things are doing better than I would have expected. The "Rocket" snapdragons (from Park's) are still blooming away -- they're advertised as being very heat tolerant, and I haven't seen them droop yet this season (I do water every morning). The colors in the 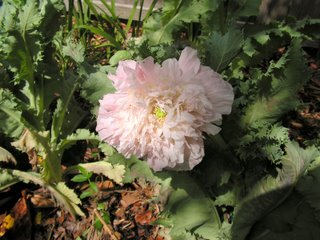 Two new blooms in my garden: The Pink Paeony Papaver (poppy) (right) that I started from seed in December and planted out into the back of my bed at the beginning of February bloomed for the first time today. I wish I'd gotten it out earlier -- it's very cold-hardy and I fear that I won't have long to enjoy the blooms. I forgot earlier this week to water one morning, and I came hope to these poor plants lying flat and wilted. It took a couple of days for them to regain their form. I planted some Papaver rhoeas, too, and they bloomed fleetingly: Beautiful and exotic, but not well adapted to spring's tendency towards heat waves. I'll definitely find the room to plant more of these Paeony poppies next season.

I bought some cheap dahlia tubers from Lowes this winter, more out of curiousity than anything else. I've never grown dahlias before and made some mistakes when I planted 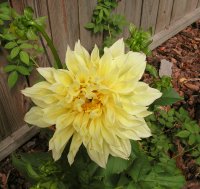 them mid-February, but I still have six plants growing in the back of bed. They seem to do fairly well in the sun, but they're plagued by insects on the lower leaves. They've grown vigorously -- the largest came into bloom today after only six weeks. The pale yellow is perhaps not my favorite, but given the ease and the size of the blossom, I won't complain. There are another half dozen buds on this plant, so I'm glad I staked it well early on.

There's a burgundy one in full bud now: Not as tall as the yellow, but bushier. I can't wait to see it when it opens.
Posted by Michael at 11:35 AM No comments: