I'm in the mood to try something new in my summer garden... I've grown Amaranth, which is really tasty and a breeze. It's been a long time since I've grown Malabar Spinach. And I'm intrigued by the description of the India Spinach Beet, which claims that it's a popular hot-weather crop in India, which shares some of our meteorological conditions, so, it's surely worth a try. Oh, and the squash sounded like fun. I love hybrids.

India Spinach Beet is a fast growing vegetable, native to Indian hot and raining summer weather. Leaves are smooth, tender and uniformly green. First cutting can be done in 25 to 30 days after sowing and subsequent cuttings can be harvested in 15-20 days. Instead of the cutting method, some people like to harvest by picking outter leaves for eating, while the plant continues to produce more new inner leaves. This vegetable is strongly resistant to heat and is one of the most popular greens during hot summer in India and Southern Asia.
Posted by Michael at 10:19 AM 5 comments:

Responding to some questions in the comments...

"How do you battle stink bugs? We barely get a tomato from our plants because the stink bugs beat us to them?"

For whatever reason, I haven't had much of a problem with them this year, though in years past they've been a nuisance. It's very important to pick your tomatoes before they are too ripe--I usually try to pick them right after they've blushed, or maybe the next day. They ripen up just fine on the countertop, no discernible difference in flavor. You can also control the population with a pair of needle-nose pliers and a quick hand. The problem is that the bugs seem most active during the hottest part of the day, which makes the whole affair unpleasant on several levels.

This is my first year for home gardening and it's been very exciting. However, my squash and cucumbers have fallen victim to pickleworms!! I wanted to ask if you were successful with bagging your plants to resolve the problem? Do you bag the entire plant or just the blossoms/fruits? Thanks so much!

I've had great success in the past, but I was away from home during the initial invasion of pickleworms and now the cukes have stopped setting fruit, so this year, no chance to try it. In the past the biggest obstacle has been heavy rains that would ruin the bags... I wish we had that problem right now!


I hope that trombone squash comes up! I saw it in a youtube and loved how the slices are almost uniform when using just the neck, AND no seeds from the neck either! Never heard of those limas either, are the beans actually black

The tromboncino is really tasty, too! One fruit weighs at least a pound, and there are no seeds to speak of anywhere in the body. Oh, and the limas: These are a passalong plant, supposedly a hybrid of Willow Leaf limas and another black lima. There's a whole story about a dying agronomist in Tennessee... anyway, I found them when I was rooting through my bag of bean seeds and thought I'd give them a try. It's a bit late to plant limas, but they'll still produce.

Before dashing to the office, I planted:
No room in the garden for peanuts. I'm continuing to plant sweet potato slips as they come available from my "stock." Now... Off the salt mine!
Posted by Michael at 9:36 AM 1 comment:

Most people I know here in Florida plant two bean crops--one for the fall (mid-August plant date) and another for spring (first warm week plant date). I don't usually bother with the fall beans.

When I returned on Saturday after a month away, I found that my early-spring crop was dead or nearly so, with only a few vines producing the typical misshapen and stringy beans I've learned to expect for this time of year. The May-planted Rattlesnakes, though, are growing vigorously, full of blossoms and perfect, mottled, narrow, tender beans. We'll see how long they continue to produce, but it seems that it's possible to extend the green bean season for at least a few weeks into mid-June or later. Since the Rattlesnakes are saved seeds, and beans are generally a low-hassle crop, the cost and trouble are almost surely worth it.

My Willow-Leaf limas, planted a week or so later than the Rattlesnakes, are blooming and vigorous. Strangely, my yardlongs seems puny. They haven't started to run or bloom. I need to throw some cowpeas in the ground where the declining pole beans are planted. Maybe I'll grow some extra limas, too.

Man, it's HOT out there. I'm "lucky" to be suffering from some serious jet lag. I was up at 3am this morning, and cleaning up the garden before sunrise.

I noticed the bee hive has gone crazy with the new super. I counted more than 60 bees a minute exiting the hive at dawn--a steady stream.

A few other mumblings and reminders, while I'm sitting here: Cucumbers are basically done. The ones that are setting are generally beset by the #(*&##%* pickleworm. I need to tear them out. Sweet potatoes are only now beginning to run. I need to plant peanuts. Peppers seem to be slow this year--lots of fruit on them, but the heat will probably limit the fruit size. I need to get some basil seeds. I harvested a bunch of large, sweet red onions. I'd all but forgotten they were there. Tops were all dead, but the onions themselves look good.
Posted by Michael at 11:33 AM 2 comments: 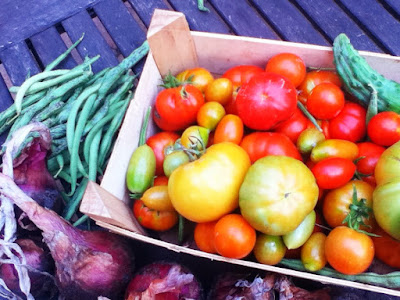 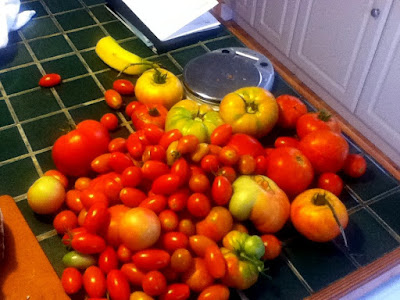 Back after a month on the road. Ridiculous tomatoes. These are today's harvest--my wife tells me it's small compared with previous days' harvests. I'll do some updates to the blog later this weekend when I'm recovering from jet lag.
Posted by Michael at 11:27 AM 1 comment: