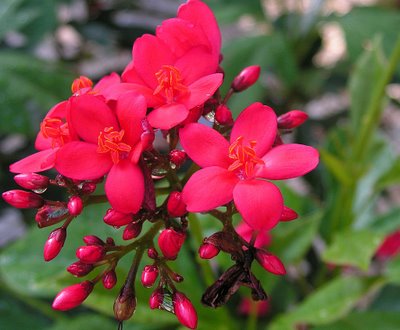 August is upon us: Intense sun, daily highs around 92°, frequent deluges and night-time temperatures in the lows 70s. Some plants, like this Jatropha and other tropicals and subtropicals thrive in weather like this. Well-established bushes and trees can grow a foot a month. Many annuals, though, give up the ghost in now or in September. I pulled my last strawflower out of the garden today—it had been blooming since mid-March or earlierso nearly five months. 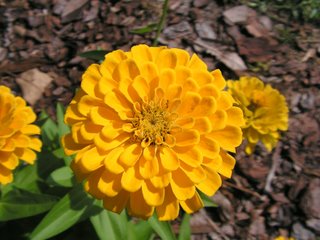 he past, I've had trouble with root rot or related fungus taking out my zinnias in July or August; this new cultivar, and the fact that I planted them earlier, in early May, must have made the difference. I've interplanted these zinnias with 'Purple Knight' Althernanthera— a nice effect.

My roses are still producing some fits of blooms, though they go into "grow green" mode this time of the year, concentrating their energies on rapid growth rather than producing blooms. My OGRs and the ever reliable Don Juan have been blooming consistently, though; the Don is now over fifteen feet tall and blooming like a romantic fool. Grandiflora and hybrid teas bloom irregularly. For the first time this season, my 'Gold Medal' bush has put out a burst of new growth and some pretty blooms (below). And 'Mr. Lincoln' has been productiv 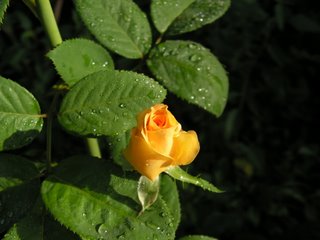 e lately, too. I bought both these bushes this winter, stunted and nearly leafless from Home Depot for $1.50 each. A lot of love and attention (and fungicides and fertilizers) have been lavished on them, and the return has been prodigious.

We had a severe windstorm here in DeLand last week—one of the worst storms I've seen—which snapped several dahlias neatly in half. They've recovered well, with the lateral growth quickening, but I'm worried that the hollow stems left open to the elements will eventually rot the roots. We'll see. Over the next eight weeks, a lot of plants will die or go dormant, but November's cool winds will wake them from the sleep and we'll enjoy a Florida "spring" about the time Thanksgiving rolls around.