Bustling about the garden...

Let's see... What to say about my gardens. First, my flower gardens are in disarray. My Prosperity rose suddenly up and died. This rose was about five years, and has (had!) a trunk the size of a wine bottle. I noticed a problem at the beginning of September, and within a few weeks, it was dead. I have no idea what's wrong with it, but in the same bed I have other roses on Fortuniana that are also looking much worse than they did a few months ago. I have no clue what's going on--no evidence of insect damage, and I tested the pH--just a bit under seven, so ideal for roses. It's heavily mulched, rich soil. I can only guess that the stress of a very dry spring followed by Fay's twenty-two inches weakened the plant and left it susceptible to disease. Whatever. It's dead now, and I am going to radically rethink that bed. Primarily, I've decided to move away from roses as structure and towards other shrubs that require less maintenance. Nothing is more beautiful than a rose in its prime, but the fact is that roses are temperate (and temperamental) plants, and we live in tough climes here in FLA. That bed is essentially a blank template, and I'm going to rework it to have a lot more blooms, a lot denser foliage, and lower water and chemical needs.

Sigh. Very depressing about my Prosperity. It was a favorite of mine.

The veg garden is flourishing with the moderate temperatures and cool nights. We had a doozy of a rainstorm a couple of weeks ago, and no rain since. That's been ideal, since it's let me water modestly every day and kept the seeds I sowed from being washed away by the torrents of rain we get here. No fungal problems, surprisingly little insect damage aside from the inevitable snail damage on the lower leaves of seedlings. But they're growing fast enough to outgrow what problems there are.

A note to myself: August first is not too early to start Brassicaceae. I started them on August 15, and had great germination and fine growth, so a couple weeks earlier shouldn't make much difference. On the other hand, the lettuce and carrot seeds I sowed still haven't germinated after six weeks, so I'll likely have to resow them. Perhaps with the cool nights we've been having, the seeds will still germinate. I simply don't know how long small seeds like that persist in soil before decaying or getting eaten. We'll see. Fortunately, the salad seeds are all saved from last year, so, nothing ventured, nothing gained will be my attitude.

Best things in the garden right now: Kales, collards, broccoli, and arugula. Herbs are starting to come back from their summer simpering.

Spent half an hour this morning doing a heavy fall pruning on my Old Garden Roses. Oh, I also tested the pH around my blueberries. Despite lots of pine bark mulch, careful preparation of the bed, etc., the pH has risen from around five to seven--far too sweet for the blueberries to thrive. So, I threw a lot of garden sulfur around them and watered it in thoroughly. I expect that by early spring the pH will have lowered substantially and they'll put on some decent growth.
Posted by Michael at 8:43 AM 1 comment: 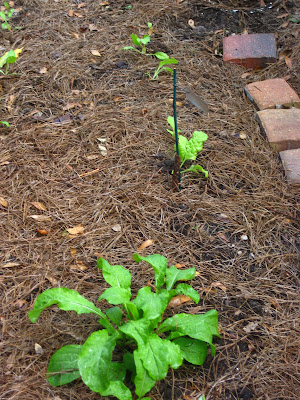 I did some horticultural penance for all the fishing I've been doing lately. Spent a HOT October morning and afternoon (it had to have been close to ninety out there, and precious little breeze) doing more garden clean-up and organizing today. I dug up another patch of sweet potatoes. In this bed, I'd spaded a bit and thrown a heavy layer of trash mulch on top, and the results were much better than my earlier patch--lots of nice batatas (probably six or seven pounds) for roasting this fall. They're out curing in the gazebo. I still have one more patch of sweets left out there, but I'll let them go another few weeks and eat them for Thanksgiving.

I pulled up the kids' garden and reconfigured the area to plant more vegetables (radishes, carrots, peas) in a few weeks. I spaded in a wheelbarrow-full of mushroom compost and a bunch of shredded green trimmings, and covered the ten-by-fifteen foot area with a heavy layer of grass clippings I snagged by the side of the road. I'll give it a week to cool down and then sow some seeds. That area gets a lot of morning and then late-afternoon sun. Should be perfect for winter growing.

I sowed turnips (Seven Tops), a mix of salad and herb seeds (Summer Glory saved seed, Red Sails, mache, chervil) , and some Pak Choi (saved from last year's crop) in my main vegetable bed. It's about two-thirds planted, so I'm glad to have the extra space in the bed I created today.

That's the Apollo Rocket and Sea Foam chard above. One month after sowing, the arugula is almost ready to start harvesting. What a great plant--it'll produce until May at least.

Posted by Michael at 4:19 PM No comments:

Bred for the hot desert of Israel, this robust, bolt-resistant variety stays sweet and crisp in hot weather. Holds up the best in summer heat of all varieties trialed in New Mexico research farm. Very large, medium green, dense 14-16" heads are great for packing. (avg. 26,000 seeds/oz.)

My flower garden suffers...
Posted by Michael at 8:05 AM 1 comment:

Finally, I've identified the stinkbugs on my tomatoes... The leaffooted bug Leptoglossus phyllopus (L.). On this useful IFAS site.
Posted by Michael at 8:04 PM 6 comments: