A quick update in collage... 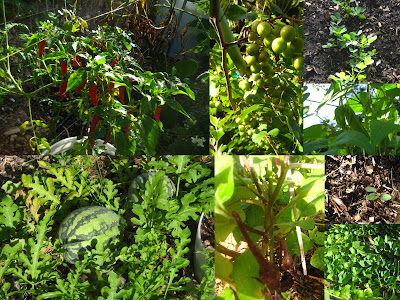 I only have one eggplant this year, and it has only just started to set fruit... but it has set four or five already and its growth rate has ramped up with some extra fertilizer, compost and a thick layer of mulch. I picked my first watermelon yesterday--it was GREAT. Very sweet, pure melon taste. I probably should have picked it a few days earlier, as the texture was slightly coarser than it should have been. It's very hard to tell with melons... I'm planning to pick several more this week. Let's see... I have a major aphid infestation with this hot and dry weather. I'm banking on a weekend tropical storm to knock them out. If not, I'll treat them next week. I noticed this morning the first hint of color on my grapes--looks like, despite our cold temps, I should have grapes starting early-/mid-August, as usual. Limas are finally producing pods, but the aphids are there, too. I planted "Star of David" okra, which is supposed to reach six feet at maturity. It sure does vigorously. Peanuts are doing well. Sweet potatoes are running everywhere. My trombone squash is setting a lot of fruit... Click the collage for more detail.

I get lots of emails with questions. When I have time (like this morning), I answer them.

Hi there,
My name is . I recently bought my first house in downtown Orlando. My got a huge corner lot that is was in pretty pathetic shape garden-wise. I really want a color and scented garden. Is there anything you can suggest? So far I have a few jasmines, plumbago, butterfly bushes, verbenas, a purple "yellow bell" looking thing whose name I can never remember, and some little succulents whose name I can also never remember. I also want to plant fruit trees, mostly blueberries, citrus and strawberries. Do you suggest any other fruit? Sorry to bombard you with questions, I think I am a little garden happy right now.
Thanks in advance for any help you can provide.
p.s. if you have any nursery suggestions I will take those too!

dear , it's a tough time of the year to start anything aside from woody perennials (like your jasmines and plumbagos). heck, even those are difficult unless it's very rainy. best to wait until the first cool front in november to try to plant much of anything new. right now i'm on standby--weeding, watering, waiting.

the easiest fruits to grow, imo, are grapes, citrus and bananas. a little harder are peaches & persimmons. blueberries are somewhat difficult inasmuch as it is very hard to keep the pH down (keep the acidity high). i really recommend sunshine blue blueberries, as these are very indifferent to acidity. you can get the sunshines at lowes in the cool months--very inexpensive, very productive bushes that don't grow too big. perfect for the backyard grower.

citrus can be got at a bigbox store, or at just about any nursery. i recommend that you order your grapes from a good nursery, esp one like JUST FRUITS AND EXOTICS (google it!). i grow nesbitt. very productive and easy. peaches, plums and persimmons can be purchased from JUST FRUITS and also from CHESTNUT HILL TREE FARM. i really like my flordaprince peach. i just planted some gulf-series plum, and i'm told they are fairly easy and productive.

for the best bananas you should attend the swaps that are organized on gardenweb, or post something on the swap page there. lots of very good gardeners down in orlando with tons of pups to give away.

finally, if you're look for something easy and pretty, i really recommend the new red knockout roses that are widely available. own-root, vigorous, and they are blooming heavily for me. i might make a big bed of them out front of my house this winter.

Posted by Michael at 9:38 AM No comments: 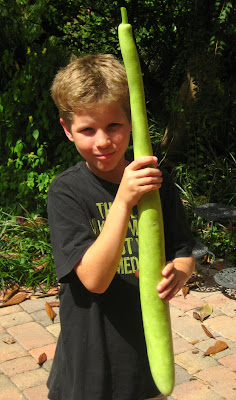 First cucuzza/trombone squash of the season. I think the common names are interchangeable. In any case, it's not really a squash, but a gourd: The flowers are white, bloom at night, smell like honeydew. The vine runs like crazy: Right now it's gone up a six-foot pole, across the top of a ten-foot conduit, down the opposite pole and now is running across another trellis. The picture below is from a week ago. The vine has probably doubled in length since then. This squash hadn't yet set when I took the picture below on the tenth, so, mind you, this fruit is less than a week old! And now it's, what, forty inches long? Wow!
When the vine gets really big it can support several of these fruit at a time.
The flesh is perfectly white, crisp, and sweeter/nuttier than regular squash. I think it's superior to zucchini squash, especially raw.
I'm making squash enchiladas from Rick Bayless's Mexican Kitchen tonight: Corn tortillas dipped in a mildly hot chile sauce, fried, and dressed with squash and salty cheese.
Elsewhere in the garden... My metki cucumbers have started to produce, lots of hot peppers, peanuts are doing well, okra are up but weeks from producing, eggplants are doing well and finally starting to set fruit, tomato seedlings for fall are doing OK, grapes haven't started to color, limas are only just now flowering (got 'em in too late), the yardlong beans have started to twine, and sweet potatoes have the run of the place... Typical late-summer garden.
I need to get up the nerve to pick one of my watermelons!
Posted by Michael at 4:00 PM 2 comments: 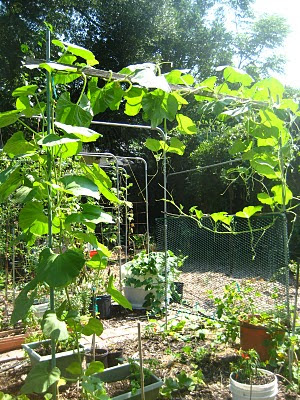 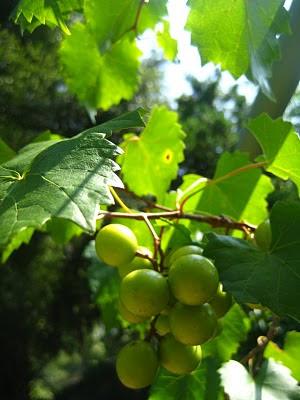 Good harvest of Nesbitt grapes this year... they've ripened at the beginning of August the past couple of years. This year will likely be a little later. 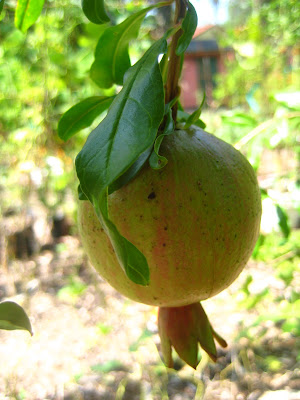 Pomegranate! I have two fruits on my small tree. 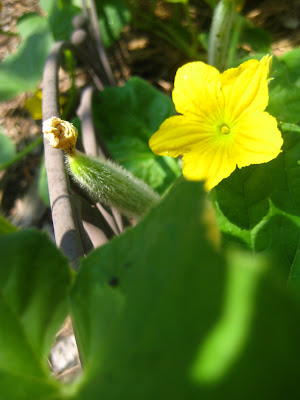 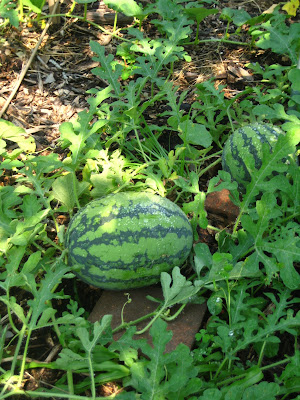 Never grown watermelon here in FLA before. I planted the seeds (Asian Sweet from Evergreen seeds) at the end of the first week of March, and transplanted them into the garden sometime in April, in a sunny spot where I usually grow sweet potatoes. One of the few things that fared well while I was away for five weeks. I have six nice, football-sized melons (not sure how big they'll get), and the vines are continuing to sprawl everywhere. I expect a few more to set. Not bad from two seedlings. 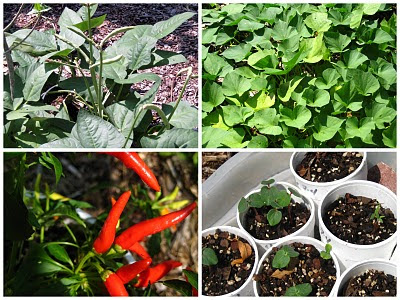 Posted by Michael at 9:24 PM No comments:

Someone sent me this interesting calculation of chill hours in Central Florida, based on FAWN temperature data.

I have calculated chill hours for Orlando based on the FAWN weather data. I thought you may find this useful since you have posted similar information on your very informative and interesting blog.

Of all the complexities of Florida gardening, this one is particularly vexing: We cannot really grow much in the way of tropical fruit like mangoes and bananas. Sure, in a limited way, we have some success--some years, I get more bananas than I can eat. But, as has been the case for the past two winters, other years my bananas get burned down to the ground (delaying fruiting by a year or more), and my mango tree dies despite my best efforts.
So instead of tropical fruits, we try deciduous low-chills, like tropical peaches, persimmons, pomegranates, low-chill apples and pears, etc. Years with cold winters yield heavily, while years with warm winters result in low flowering and fruiting, sometimes no crop at all. This past winter was so cold that my pomegranate is still flowering in mid-July! My peach tree bore heavily, my apple tree set fruit for the first time, and so on.
Having done a lot of shopping for such trees, the sweet spot seems to be 250 hours or more--it really expands the variety of trees (if you believe the chill-hour requirements that growers list... I don't, mostly).
DeLand is a few degrees cooler than Orlando, so it's safe to add ten or twenty hours to the numbers above. That still means that every other year, or maybe every third year, is well under the minimum "ideal" of 250 hours.
So, just barely cold enough for temperate, not quite warm enough for tropical.
I guess there's always citrus!
Posted by Michael at 10:44 AM 3 comments:

I spent most of May and June out of town, and am only now getting back into the gardening groove. I set up a micro-sprinkler system for my vegetables and fruits, but greatly underestimated how much water I needed on a daily basis... I think the wet season must have started late, and combined with hotter than normal temperatures... well, let's just say that my tomatoes and cukes didn't produce this year as well as expected. It didn't really matter to me, as I was gone and nothing important died... Apparently my peach harvest was first-rate this year--I missed it entirely, but friends made sure nothing went to waste.
Anyway, I'm back in the game again, though I'll be traveling extensively in late July and August, so who knows how things will work out.
Right now, I have a great crop of watermelons growing--six nice big melons in a very small area. It's "Asian Sweet" from Evergreen, and, if the melons are tasty, it will take a permanent place in my lineup for summer planting. My trombone squash (Tromboncino) is hellbent on world domination, and has started to set fruit. Metki (Painted Serpent, I believe, but we'll have to see) has finally started setting fruit. Limas are late this year, but starting to produce. Cowpeas (Mississippi Silver) are producing nicely. My eggplants nearly died while I was gone (watering issues), but now that I've been taking care of them, they've tripled in size and are finally setting fruit. Same goes for my peppers--it might be too late to get a crop, but they've started to flower and put on a lot of growth since I've watered, weeded and fed them.
Sweet potatoes are flourishing. Grapes are prolific and large--I guess they should start to ripen soon. Finally, I have several pomegranates of nice size--the first crop on this tree. We'll see how they taste. My experience with them in Florida hasn't been great.
One final note--when I got back, I found one large, beautiful apple on my Anna tree. I ate it at the beginning of June, and it was fabulous. A first-rate apple. I've got three of apple trees now (Anna and Dorsett), but only one, growing on a trellis, is large enough to produce fruit. Next year, I'm hopeful, with another summer of growth and some pollinators around, that I will get a nice crop.
While gone, I "solarized" half my garden, and I've just this past weekend gotten around to planting it with peanuts and okra for late summer and fall. I've started some tomatoes
Posted by Michael at 10:05 AM 3 comments: