OK, I RAGE, RAGE RAGE AGAINST THE WORM!

Damn them. Oh, I am SO tempted to get out that bag of Sevin my mom gave me "just in case"

... See how they like the taste of Carbaryl! (pant pant pant)

I'm a little worked up. Witness the ravages: 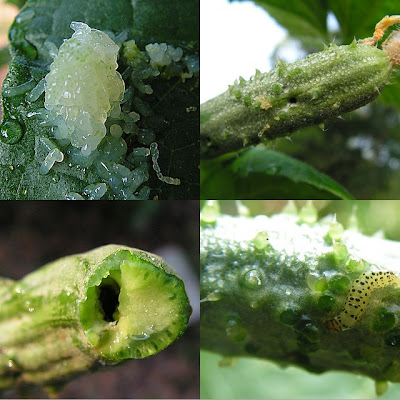 (Egg cluster, entry hole, damage, caught in the act...)
We eat a LOT of cucumbers. I had such a great run this year, though, that even with full-time, all-out cuke eating, I had enough to make several batches of pickles. I even had the fungal issues completely under control through regular copper spraying, hygienic culture, and trellising: 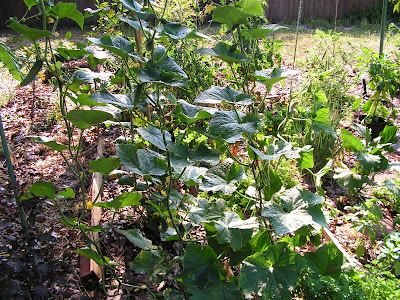 (A single plant, trellised over four strings. It reached the top of my 6' trellis, and was beginning to spread over the wires that run between my two trellises.)
I almost ripped them out of the ground, since everything that I've read about these buggers indicates that, short of smothering them in insecticide, there was nothing to be done. Surrender. All. Hope.

But, poking around on the Web, I found this...

[2734] FRUIT BAGGING FOR PROTECTION OF CUCUMBER AGAINST THE
MELONWORM, DIAPHANIA HYALINATA, AND THE PICLEWORM,
DIAPHANIA NITIDALIS.
J. O. G. de Lima1 & E. A. da Silva1, 1Laboratório de Proteção de Plantas, Univ. Estadual do Norte Fluminense, Av. Alberto Lamego 2000, 28.015-620 - Campos dos Goytacazes, RJ, Brazil. E-mail joscar@uenf.br.
In all regions of Brazil, the melonworm, Diaphania hyalinata, and the picleworm, D.
nitidalis, destroy several cucurbit fruits, especially cucumber, which if unprotected is
seriously damaged. Besides the frequent use of insecticides, no other single method is effective for protecting cucurbit vegetables. In order to find an alternative to insecticides, an experiment was carried out in the field to test the efficacy of paper bags for protecting the cucumber fruits against the pickleworm penetration. Bagging was accomplished no more than 24 h after the flower pollination (beginning of the flower wilting process).
In the four treatments used, the percentages of bored cucumber fruits at the first harvest (04.20.98) were: 1. Conventional application of insecticides (weekly application of deltamethrin at 5 g a. i./ha): 40.0 %; 2. Bagging the fruit and no insecticide application: 27.1 %; 3. Weekly application of deltamethrin (5 g a. i./ha) before and after bagging of the fruits: 30.0 %; and 4. Control (No insecticide application and exposed fruits): 52.4 %. Because of the poor quality of the paper bags, some of the bags split open at the first harvest and this number increasead at the second harvest (04.28.98). Due to these problems, the experiment was discontinued. However, the preliminary results were promising in that bagging reduced the need for application of insecticides. In addition, the color and size of the fruit were not altered by bagging. There is great potential for bagging of cucumber, especially using a new type of microperforated plastic bag, which is currently being tested.

Notice that the bagging is 50% more effective (40%/27%) than the conventional insecticide.

Guess what I'll be doing tonight?
Posted by Michael at 9:15 AM

That's too bad. I got so upset by fungus on my cucumbers that I DID pull out the sevin. The plants ended up dying anyway and I haven't planted an vines, so I feel your pain.

hey,
have you tried the bagging? we have pickleworms this year, and they're making me angry! thanks for the tip!
Leah

Leah,
It worked well, but we get such heavy rains that the bags tended to break down before the cukes were ripe... then the damn worms would get to them. You have to be pretty careful bagging them -- little or no holes or gaps. Worth the time, though.

thanks for the tip.

I read that you can plant summer squash near the cucumbers and they will eat that and leave the cukes alone. I believe it's true too since I had a terrible pickleworm problem with my summer squash. I made the mistake of pulling them out before I read that article and now my cukes are being attacked. I wish I had left one behind.

They also suggested planting a summer squash to lure them in and applying some kind of pesticide to kill them off. Haven't looked more into that though.

What if you like cucumber and squash and have these annoying little pests? I have them borrowing into my squash, I plucked a ripe one just now, beautiful till i looked under and saw all of the holes.. I cut it open to find nasty green caterpillar looking worms trying to escape to freedom. How do you get rid of them!!!

Try Dipel or Neem. Both organic. That's what the big organic growers use in Central Fla.

If you cut out the parts that are eaten, is he rest safe to eat?

don't even bother. if you submerge the cuke in a bowl of water, the little rascals come out. oss them away. clean the cuke and enjoy.

How do you do the 'bagging' technique? And also where can you find the Dipel or Neem pesticides? At a special store or at Lowe's? Ellie

I found both Dipel and Neem at Johnnyseeds.com. I am having the same problem with pickle and melon worms this year. I planted zuchinni and squash, and they really bore into the plant, just pulled them out today, and after reading this, I am thinking that was a bad move too because my cucumbers/melons/and winter squash haven't been bothered too bad, but now I'm really nervous.

I guess I have an infestation, but my biggest problem is one garden area, where I have ALL different types of squash, cucumbers, watermelon, pumpkin etc. They are RAVISHING every leafy plant in my garden! Now my tomatoes, carrots, beets, and spinach are free and clear but EVERYTHING else is suffering and I dont believe I will get any harvest what so ever. It rains every day, anyone have any success with the plastic type bags?

I have Dipel all over my garden and the pickle worms are everywhere. they did attack the summer squash first. Plant them as trap plants before you waste Dipel dust. (In Florida)

Hello all,
I'm going to throw this out there, I had an Idea to place the cucumber into a stocking and tie off the end around the stem, but haven't tried it yet.

Has anyone tried this?

May be a solution to many kinds of infestations.

I have summer squash planted next to my cucumbers and they are eating BOTH of them. If I harvest the squash a little early, I can usually get them before the worms get in. No such luck with the cucumbers. They are boring into all sizes of cucumbers.

Pest Control Woodbridge VaNow this is in actual fact cooperative. It’s very openhanded of you to share this with us.

Thanks so much for posting this! I was wondering what caused the holes in the cuces. Such a shame! Stupid worms! Wondering if anyone had any success in keeping them away?

These ugly gross worms have eaten most of my zucchini, and done of my dinner squash. I will say the addicted flour and pepper worlworks well on some pests. I hope something works for these worms. I'm going to try the flour again pepper again, I'll let you know. Haven't tried it since the pickleworms came.

These ugly gross worms have eaten most of my zucchini, and done of my dinner squash. I will say the addicted flour and pepper worlworks well on some pests. I hope something works for these worms. I'm going to try the flour again pepper again, I'll let you know. Haven't tried it since the pickleworms came.

Yeah... They arrived last week here in DeLand. I've discovered that Neem oil (the straight stuff, you can get it cheaply at Lowes or online) and a paintbrush work really well... Just paint the fruits with the oil once (and probably after rains?)... Works like a charm, though it's a bit laborious. Cheap, a couple pennies worth of Neem, totally organic. Since the oil makes has a sheen and texture, it's easy to discern what parts of the fruit have been treated. Wash it off before eating (though there are plenty of people who brush their teeth with Neem oil, so it's perfectly safe).

Thanks for the post . It helped me a lot. I also get some decent idea to make money from your post. I wish I myself can generate some good income fast
شركة رش مبيدات بالرياض
شركة مكافحة حشرات بالرياض

I also have a huge problem with these little devils! You can obviously see small black eggs on the leaves and always find them crumpled under the leaves and in the cucumbers! I have watched a lot of Youtube videos on how to treat them and found Neem oil.... I have been using a sprayer and combining Neem oil , soap (to allow Neem to mix with the water), baking soda (to help with fungus) and Mag. sulfate (which helps plants like a fertilizer)... So far I can say that it helps the plants grow stronger and does help expel the worms but they still come. Maybe I need to increase the concentration of the Neem oil. Oddly, my tomato plants that are right next to the cucumber are untouched.
Never heard of Dipel.

faresfares864 said...
This comment has been removed by the author.
4:40 PM

faresfares864 said...
This comment has been removed by the author.
4:40 PM

faresfares864 said...
This comment has been removed by the author.
4:34 PM

I tried this. They actually bored THROUGH the stocking. I was rather upset


Our company is the strongest and best company specialized in cleaning the compound, and it is worth noting that the company has many branches throughout the Kingdom, and the company uses many distinctive technologies and methods.
شركة تنظيف فلل ببريدة