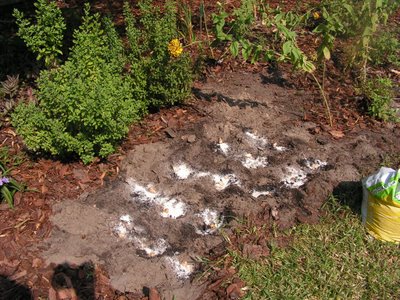 It was supposed to be much cooler today than it turned out to be. Despite the near-90° temperatures and humidity, I forged ahead and planted fifty Freesia bulbs and a dozen Amaryllis bulbs. As usual, I bought them from easytogrowbulbs.com, and their quality was exceptional: The Freesia were three-quarters of an inch in diameter, and the Amaryllis (which I got on special at around $3 per bulb!) were the size of cooking onions.

The Amaryllis (one of the toughest plants I know) went into the full-sun bed that lines the walk to my back yard with a little fertilizer and some water-retention crystals. I didn't enrich the soil much, since they're growing in more than five years of decayed pine mulch -- it's at least six inches deep. The Freesia, which went into a new bed that gets about six hours of morning sun, got a little more attention: Two handfuls of compost, a handful of bone meal, some water crystals and Osmicote. Both were heavily mulched in pine bark.

I had great luck with the Freesia last year: I planted them at the end of December, and they bloomed for six weeks, starting mid-March. I'm planting them much earlier this year, hoping that I'll extend my growing and blooming season by a bit. I left last year's bulbs in the ground, and I think I saw one of them poking its leaves through the mulch today.
Posted by Michael at 2:42 PM