A few words about Cherokee and Fortuniana

With Central Florida's sandy, hot and nematode ridden soil, most roses are doomed to a few years' lifespan before losing vigor and eventually failing. You can buy a nice rose at the local Home Depot for $10, and that rose will return dozens of blossoms for a modest investment in that short span. Not a bad bloom for your buck.

However, it really takes several years before roses come into their prime: Their canes thicken at the base, they grow and flower more expansively, they require less water. I've only lived in this old Spanish Revival house for a few years, but the roses that have been growing in my garden for two years are remarkable for their vigor and floriferousness. Some roses, like my hybrid teas 'Elegant Beauty' and 'St. Patricks' bloomed only fitfully during their first year. Now that they've adapted and grown a bit, they bloom freely and stand up to the heat and humidity better than initially.

While there are dozens of Old Garden Roses that can survive growing on their own stocks, your money is well spent investing in plants that are grafted onto 'Fortuniana,' an OGR (Old Garden Rose), believed to be a natural cross between two Rosa species, R. banksiae -- the 'Lady
Banks' rose -- and R. laevigata, the 'Cherokee Rose.' (One of the other common names for 'Fortuniana' is 'Double Cherokee.' Notice the resemblance between 'Fortuniana' above and 'Cherokee' below. )

A few quick words about the latter patriarch in 'Fortuniana's' lineage. The Cherokee Rose is the state flower of Georgia (though it is not native there), and grows here in Central Florida on old brick fences around my neighborhood. The beautiful old Mediterranean Revival house to the east has 'Cherokee' growing as a twenty-foot hedge, the tips in the morning wind wave madly at me against the bleached blue sky while I putter about my business. Early in the spring, mid-March, those long and thorny canes 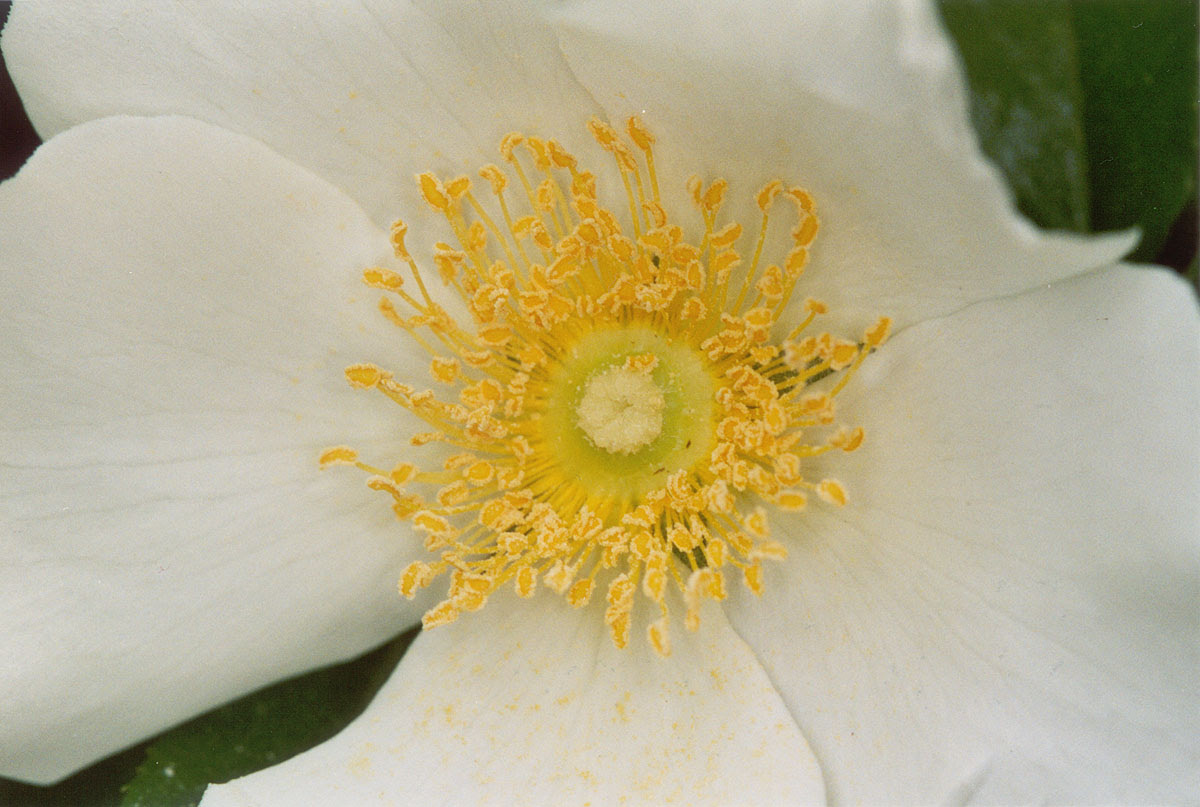 are covered with simple but charming white flowers with yellow stamens and anthers (right). It's a likeable rose in its own right -- zero maintenance, and amazingly vital. I started several cuttings of it last year by just sticking them in sand in the spring, and they've quickly mounted my gazebo's roof, where I imagine the temperatures reach well over 130 degrees in the heat of summer. The canes are already 15 feet long -- in one year.

Anyway, back to 'Fortuniana.' Robert Fortune introduced the rose in 1850 (hence 'Fortuniana'), and wrote of the rose:

The white climbing rose referred to is cultivated in gardens about Ningpo and Shanghai, and is held in high esteem by the Chinese; indeed it is one of the best white kinds which I have met with in China. It is frequently seen of a large size covering trellis-work formed into alcoves or built over garden walks. For this purpose it is well suited, as it is a luxuriant grower, and it blooms profusely and early. This Rose was amongst my first importations to the Horticultural Society and is no doubt well worth cultivation in English gardens. It may not please in every respect Rose-fanciers, but it is very beautiful nevertheless, and it has some advantages peculiar to itself. (quoting from the Rosarian Malcolm Manners, who is quoting from Willmott's monograph "The Genus Rosa.")

The lineage of 'Fortuniana' is not uncontested. Quoting from Climbing Roses of the World by Charles Quest-Ritson:

'Fortuneana' syn. 'Fortuniana' [=Rosa x fortuniana]. Crepin considered 'Fortuneana' a hybrid between R. Laevigata and R. banksiae, but this parentage is questionable because no one has ever succeeded in crossing R. laevigata with R. banksiae. Its flowers are larger than other Banksian roses, about 6 cm across, although 'Fortuneana' flowers at the same time as they do, very early in the season. It was named in honor of Robert Fortune (1812-1880) by John Lindley in 1850. 'Fortuneana' is an important rootstock in Western Australia where heat, drought, and poor soil are a challenge to cultivation.

Fortune's rose never caught on in England, as he had hoped. It turns out the rose has poor cold tolerance, and never grew well in a damp, cool continental climate. It was, however, popular around the Mediterranean basin at the end of the nineteenth century.

However, 'Fortuniana' is perfect for Florida: It is very heat and drought tolerant, and develops remarkable root growth. I've dug out 'Fortuniana' with six-foot roots after only a year's growth. (That's prodigious growth by rose standards.) The roots also trend out and near the surface, rather than down, which allows greater absorption of water and soluble minerals in Florida's sandy soil. Finally, the rose is apparently immune to the nematodes that infect much of the soil here. (Though, frankly, I've looked for the telltale signs of nematodes on plants, and never found any where I live, though I'm not botanist.)

All these adaptations mean that roses grafted onto 'Fortuniana' will grow more quickly and larger, be less susceptible to drought and disease, and live for much longer, than they would were they own-root roses. Even OGRs that grow well here in Florida grow better on 'Fortuniana' stock. (That said, I grow a half-dozen, own-root roses.) The only drawback I've found is that 'Fortuniana' is such a vigorous rose that you end up with a lot of suckers (offgrowth from the stock). They're easy to identify (three leaves, different color) and pinch off, though.

Two other facts about 'Fortuniana': Many people wonder why they graft roses onto such long 'Fortuniana' stocks. Usually the rootstock is about a foot high, much much higher than 'Dr. Huey' up North. (You can always indentify 'Fortuniana'-grafted roses by their rootstock length.) I've heard various explanations, including "just to make them look unique," but I'm pretty certain the reason for this practice is to allow for heavy mulching, which is absolutely necessary in rose culture here. (I try to keep a minimum of four inches of pine bark mulch around my roses, and several inches deeper of old, well-composted mulch and biological debris like leaves.) As I've pointed out, 'Fortuniana' is a tough and disease-resistant plant, so it stands up to the rot problems (which are ultimately fungal) that would plague a more delicate rose. The 'Fortuniana's' stock length keeps the grafted rose out of the mulch. The other fact about 'Fortuniana': Because its roots tend to grow outward, rather than downward, I've heard a lot about the importance of staking roses. I think that's a load of bunk. Some of my roses are well-staked, others not at all. We had three hurricanes pass through here last year, and I had absolutely no damage to my roses, including a 'Prosperity' that was ten feet high and was blow n and buffeted for ten hours straight during Frances. Based on that experience, I can say without equivocationg that 'Fortuniana' does a fine job hunkering down, and needs to be staked no more nor less than another rose.

Unlike those $10 roses from Home Depot, a rose grafted onto 'Fortuniana' will set you back at least $20. One reason for this premium is that 'Fortuniana' is relatively difficult to propagate, so it costs more than own-root or roses grafted on other stocks. (You'll often find roses in Florida rooted on 'Dr. Huey' for much less than those rooted on 'Fortuniana.' Don't bother with Huey here, though -- it might buy you a year over own-root, but it's not worth the cost.)

I know of two growers that use 'Fortuniana' in the area: Merrygro farms in Eustis and Nelsons' Florida Rose. At Merrygro, the prices are low but you have to mail order them or find them at Home Depot or a local nursery. I've bought nearly all my roses from Nelsons', at plant fairs or through their distributors. They've recently opened their doors to the public, though I haven't visited. Merrygro's prices are a little lower and their selection a bit wider, but Nelsons' is a family-run business that has led the industry in introducing Florida roses. In the end, it comes down to who has the rose I want to add to my garden.

Speaking of buying from nurseries: I can't recommend highly enough developing a good relationship with your local nursery. I shop at A Garden Fair or at the DeBary Nursery. Both of them excellent, full-service nurseries with a wide and appropriate selection of plants, roses included. I've learned much of what I know about Florida gradening from chatting with the owners of these businesses, and other nurserymen at plant shows.
Posted by CFL Gardener at 8:25 PM

May be interested to know (Assuming you dont already this post is from October) but Lowes and Home Depot now carry Fortuniana grafted roses. Bought a Mr. Lincoln last weekend for $16.

I am looking for fortuniana plants/rootstock/seeds.Who cn help me plesae?raga@sr.net is my emailadres