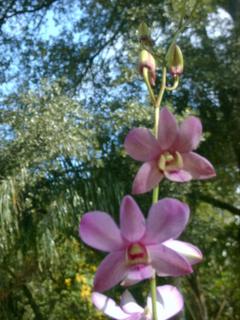 If you've read my previous postings on rose culture, you'll see that I'm a wonk of all things Rosa. I grow a few dozen orchids, too, but I don't fetishize them to the same degree: I try to practice benign neglect with them, and, by and large here in Central Florida, that approach to orchids works.

I have a pretty good collection of Dendrobiums, a few Oncidiums, reed-stem orchids that are getting huge but haven't bloomed, a handful of terrestrial orchids, some members of the Phalenopsis genus, a beautiful Vandaceous, and a few weird ones I've picked up from sales. I keep them in hanging from tree limbs or in a bright, shady spot under the canopy of a young Water Oak, in an out-of-the-way corner, on the concrete bed where the garage used to stand decades ago. My children give them wide berth, and they live there mostly undisturbed perched on old bricks I've dug out of the yard. The tree trimmer managed to mangle many of them last month when he came to cut damaged limbs from our oak tree, but orchids are very tough plants, and they've bounced back. In fact, the limbs sliced off several nearly-blooming spikes, and, to my surprise, the orchids have put out new spikes to replace them.

Aside from a once-weekly spray with a diluted foliar fertilizer (I use half-strength Miracle-Gro, balanced formula) mixed with orchid vitamins, I pay them little heed save to move them inside or to a good spot on the patio when they bloom. Most of them are planted in coir chips (coconut) -- an excellent potting medium that is slow to break down. Lately, though, I've switched to inorganic media, mostly a 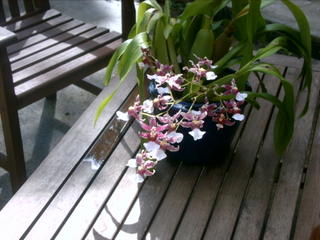 As a test, last year I bought a couple of identical (cloned) terrestrial orchids, and planted one in coir and one in inorganic medium. The latter seems to be doing marginally better, and is about to bloom while the plant in the coir, while healthy, has no spikes.

Dendrobiums are, by and large, adapted to a cooler climate than here. I love their heterogeneity, though, and have about a two dozen. They bloom freely, at least twice a year, but the foliage suffers. I have to say that I'm not a big fan of Oncidiinae 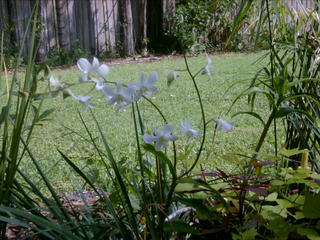 , but they bear up under the heat and humidity and their blooms last for weeks and sometimes months. I have one Paphio-
pedilum, which has only bloomed twice in the two years I've owned it. The prize of my collection is a red-violet Vandaceous named Henry. He blooms, reliably, twice a month with a break in September. He cost a bundle for me ($70), but no other plant that I've ever owned has so much bang for the buck. I'll post a photo in a couple of weeks when he comes back into bloom. His two keikis are almost four inches high now -- I'm hoping they'll bloom next year.

(From top to bottom: A Candy Stripe Dendrobium; an Oncidium, probably Wildcat, though I don't know for certain; The very pretty and reliable White Shavin Dendrobium, which blooms very regularly once every few months.)
Posted by CFL Gardener at 8:15 PM