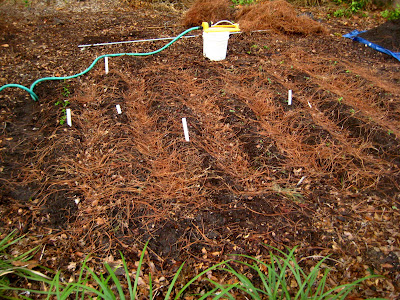 My new bed--seven rows, six feet each. I spent yesterday morning shoveling two cubic yards of compost and topsoil, filling in the bed. (I'd barrowed out fifteen loads of sand for another project, which is, apparently, about two cubic yards!) I spent $40 on the soil amendments at Volusia Shed. That gave me about ten or so inches deep of good soil to work with. I mounded the rows another few inches, and threw the old mulch into the furrows. So now a good deep strata of soil in the rows--more than I've ever planted in. We'll see if the trouble and expense (minimal as it was) were worth it.

I transplanted seedlings of parsley, green cabbages, collards, leaf lettuce, broccoli and cauliflower; and sowed turnips, carrots, cos lettuce, and mache. Sprinkled some pine straw, since I try never to leave soil bare. The hose and wand sprinkler are a temporary fix, until I finish extending my "irrigation system" into this new area. (My irrigation system is microdrip connected to PVC and spigot timers.)

The space is roughly ten feet by eight. In that space I fit a dozen parsley plants, twenty-odd cabbages, a dozen collards, half a dozen each broccoli and cauliflower, god knows how many lettuce seedlings, four feet each of turnip and carrot seeds (so, say, twenty-five each), and then some various other greens (the cos and mache). When I add pots of herbs and some window boxes between the rows, I'll have quite a lot of veg in a tiny area. Next week, I'm adding two new plums and another persimmon (all from Just Fruits) in the east side of the bed. If there's room, I'll probably transplant my Kaffir lime from its pot--it's proved itself quite frost tolerant, despite indications otherwise. It has half a dozen limes on it, and though I've left it out a few times in sub-35°, it not only hasn't had any visible damage, it's kept its limes. (Yeah, I know, you're supposed to eat the leaves, but the limes are very juicy and have a coconut-tropical zip to them.)

What a nice looking garden bed. We have had better luck with above ground beds here in Tampa. I'm putting in a new one for next year. I looking forward to checking back in on your persimmon from time to time. I'm thinking about trying persimmon in a container.

Thank you for posting such a useful, impressive and a wicked article./Wow.. looking good!
kitchen garden