Getting ready for the fall garden... 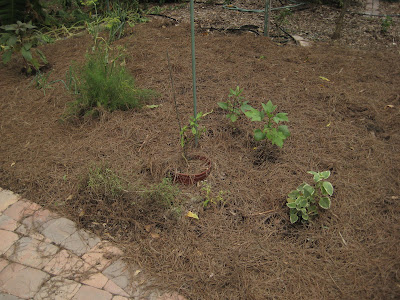 Spent the afternoon yesterday ripping out all my tired, old summer crops, excepting some Cuban oregano, fennel, and scallions. I hoed the bed, and was surprised by how compacted the sandy soil had become. I spread about 3/4 of a cubic yard of mushroom compost in the fifty by thirty area (the soil has been amended frequently over the past few years), then a heavy cover of pine straw. I'll let the compost cool down a bit, then start my fall planting sometime mid-September. I haven't decided what, exactly, I'll plant, but probably first things will include Seafoam chard, beets, and broccoli. My tomatoes (Jetsetter) are in and doing nicely. I have a couple other smaller beds that I'll plant a bit later--right now, I've got cassava, sweet potatoes and peanuts in them. Since those crops won't be ready until October or November, I'll do lettuce and radishes in those beds, during the coolest part of the year.