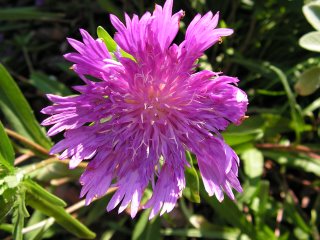 Stokes Aster (Stokesia laevis) is another reliably perennial herbaceous (as opposed to a shrub) plant here in Central Florida. When dormant, it looks like fat liriope (which, by the way, is unaccountably pronounced luh-rye-o-pee -- surely the second least predictable pronunciation after kalanchoe, which, trust me, is correctly pronounced (per Greek norms) kal-in-kow-ee).

Anyway, back to Mr. Stokes. Best grown (like most on the perennials here) with some afternoon shade. Mine has been thoroughly abused (replanted twice in the cool season) and continues to thrive. The first year I got, maybe, 10 blooms. This year it's been non-stop blooms for weeks. Makes for an interesting cut flower which lasts for at least three days. The downside (at least through year two) is that the stems are too short for really interesting cuttings: If you were to take a long stem (say 18"), you'd have to sacrifice a bloom in bud. You could do it, but it would be a pity. Maybe next year the plant will put out sufficiently long stems, or sufficiently large that I won't miss the bloom.

It's native here in Central Florida. If that matters to you. I haven't seen any seedlings, but it's clearly divisible: Fat, tangled roots, not unlike (again) liriope. (Liriope is in the lily family, while Stokes Aster is (predictably) in the Asteraceae.)
Posted by Michael at 5:24 PM