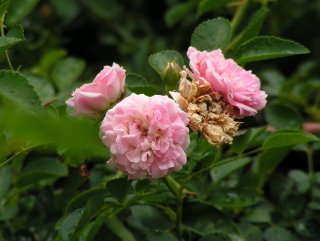 I got this rose from my grandmother's farm in Bardstown, KY as a small, sickly rooted cutting. My grandmother had it growing for fifty years, up a bell pole on the farm; planted in that red clay, it's wonder it grew as well as it apparently did. (That bell now lives in Florida, too. I have a 'Don Juan' and 'Prosperity' growing up its pole now. My mother tells me that the bell was only rung in emergencies; my son and daughter, on the other hand, ring it nearly every week, just to delight in the sound. When I mounted it a few years ago, I noticed that it was a school bell, with the year and PS number carefully etched onto the inside. I should have jotted down that information, since now 'Don Juan' is tangled up inside the bell's skirt.)

I don't ever remember seeing this rose in bloom on the farm, but my mother says that some years it was a blanket of pink.

A few years ago, I planted the Greer rose at the base of our gazebo, on a lattice. It's ambled its way up onto the roof, mixing it up with several R. laevigata that I planted there. The roof gets well above 130 degrees in July, so you know these are tough roses. They've formed a dense mat of canes from which new, vertical growth arises. It's vigorous -- I have a tough time keeping it tied up, and new basal canes are always erupting upwards and outwards.

The R. laevigata hasn't bloomed yet. I don't know this for certain, but my guess is that laevigata only blooms on old canes -- apparently older than two years. I hope to see some blooms next spring.

Today, for the first time, I noticed these tiny pink blooms growing on the roof of the gazebo. I almost missed them. I expect that this is just the first of (hopefully) many blooms this season. I don't know when it bloomed in Kentucky, but apparently it's a early summer bloomer here. I wonder what it is?
Posted by Michael at 12:00 PM