The pickleworm is arrived... And an update on the Central Florida Garden in May

It was a great cucumber season. But I noticed a couple worms today... If you search this site, you'll see the various ways I've tried to defeat the worm, but, really, after such a great season, this time I'm going to call it quits... So I picked the ones on the vine, soaked them in a bucket until the worm popped out (only a couple had been attacked), and will give them to friends... (Only so many cucumbers can one man eat!)

By the way, you can greatly extend the freshness of a cucumber by wrapping it tightly in plastic wrap (I use Saran) and tucking it into the refrigerator. Those "English cucumber" guys are on to something... 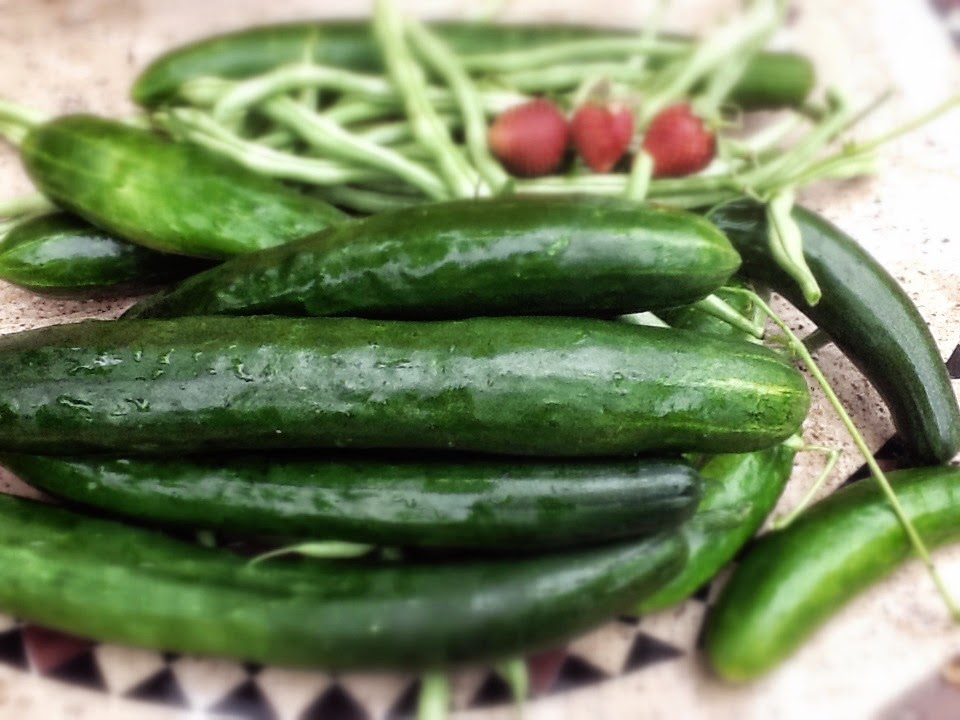 I'm also amending my "best crops for Florida" list to include Fortex pole beans. Wow. The sheer fecundity and ease of culture. Very tender (too tender, if anything), and completely stringless, even when they're quite long and bean-y. They are very early and vigorous, though it seems they go out of production as quickly as they come into production: The first sowing produced beans for about a month before declining (considerably less than, say, Kentucky wonder). But I sowed a second crop, and it's come into high production as the first crop declines. I don't know how heat- and drought-tolerant these beans are--likely not as tolerant as the Rattlesnake Beans. But the vines are deep green and pest/disease free now, after ten days of 88+ degrees and after some torrential rains, so, they're clearly tough beans!


I planted some Rattlesnakes last week, and they're already up, so I foresee several months of continuous bean production. This is my Fortex row. The vines are growing up seven-foot "walls" made of electrical conduit and concrete rebar wire sheets, and when they reached the top of the rebar, I wedged some branches into the wire and the beans continued merrily up to about twelve feet, still producing beans on their way up. I wonder: Do beans stop producing when they reach the top, or do they stop producing after X-days of production, because that's their phenotype, they just shut off? 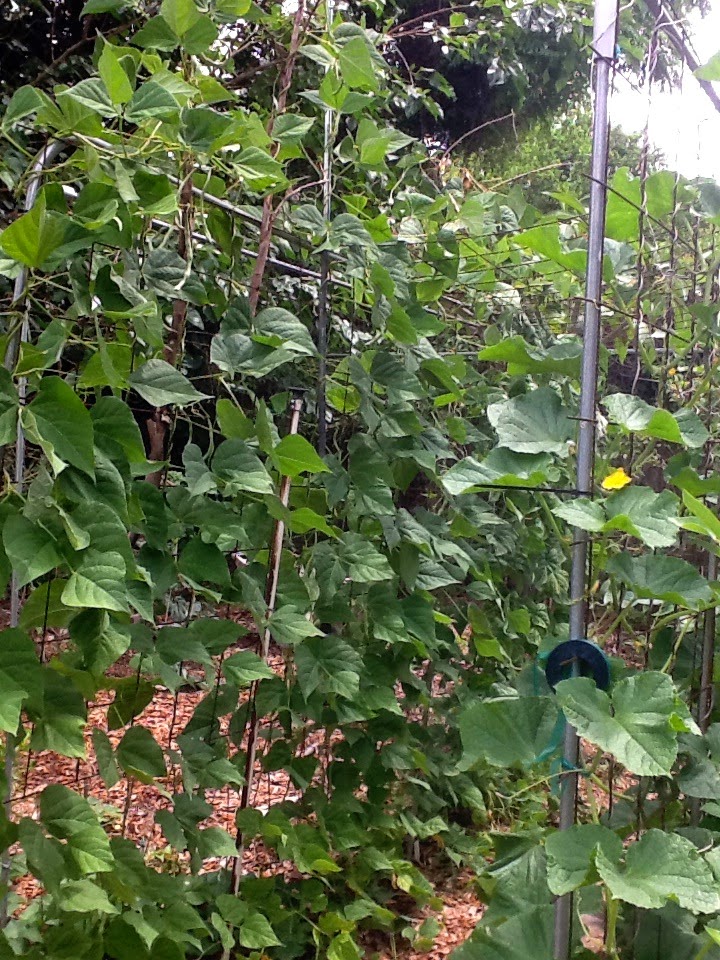 Finally, my tomatoes are a couple weeks behind (at least) after a cool and cloudy April, but they are full of fruit, and the first full-sized harvest is maybe a week away. I've been harvesting tomatoes from plants that I bought from Lowes earlier this spring--mostly Celebrity. Not my favorite variety, but very early and easy to find as seedlings. As always, I'd recommend Tomande, Juliet, and SunGold as my "go-to" varieties here in Florida. 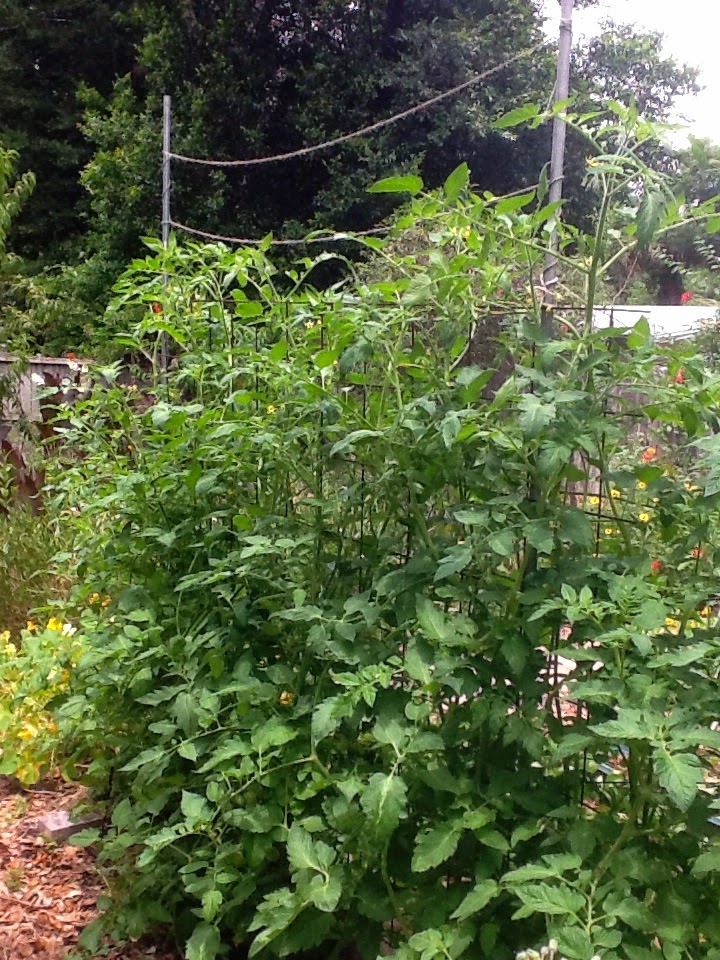 Thank you for the tip on how to store cucumbers! I always find I end up using half and the other goes to waste.

Hopefully I will eat green beans this week. The Contenders are looking good and after hearing of your success I am glad now that I planted Rattlesnake beans too. My garden in North Florida just has tiny cucumbers, but I am looking forward to pickles!

I hate the dreaded pickle worms too! Luckily the chickens love to eat the moths, and I've had a huge reduction in pickle worms since I've let the girls roam around outside of the garden. You should try making homemade pickles by fermentation. It's incredibly easy and i've found that Alton Brown has a wonderful video on YouTube too that really turns out perfect.

I live in Eustis and my garden has been getting ravaged by worms, I think may be the Pickleworm. I have harvested only 1 edible squash so far this growing cycle.. the worms are even hitting my pumpkins. At this rate I don't think I will have any squash to harvest.

How do you control this pest?

i would try BT... you need to spray daily, but it's effective.

My name is Eleni and I’m the marketing coordinator for SimGar – The Simple Garden. Our company’s owner and engineers have developed a container gardening system that combines the best practices of both traditional soil and hydroponic technology.

We’ve been testing our prototypes for over two years and just this spring launched our production version for sale online and locally (we’re in Bradenton, Florida). I was hoping you might be interested in testing SimGar for review in your publication - especially as you're so close to our homebase! Please let me know and I can get one sent to you ASAP! Thank you for your consideration.

Hi Michael,
I am an editor for a travel publication and I am interested in using some of your photos for a piece I am writing about produce in Central Florida. Can you please email me ASAP? Thank you!
Shelley-- shelley.preston@morris.com


Thanks for sharing this wonderful post, It is awesome.

First of all, I want to tell you that, I absolutely agreed with what you had mentioned in this post. Its a very nice tips about landscaping services. And everyone should go with it.

"In the gardening world people tend to be divided into green thumbs and brown thumbs. Most people think they are either one or the other and this is their lot in life. Green thumbs are just naturally good at gardening. Brown thumbs are people who don’t grow plants very well and are without hope of ever having a garden they can be happy with. So what is this secret then that green thumbs know and don’t want to share with the world?
The secret is pretty simple really; more detail are in below link.
http://buff.ly/1uZaP7b"

Wow those are amazing images, the beauty of fresh flowers and produce is simply stunning

Thank you for posting this article because I have started doing vegetable seeds online shop. That is why your all posts are helping me out in this. The information provided about cucumber is very well written.

Nice explanation here to make understand the people. Thanks for this
http://www.crepemyrtle.org/

I have written blog about tarpaulins. Tarpaulins Protect your Garden and you can also you in home. for more Read This