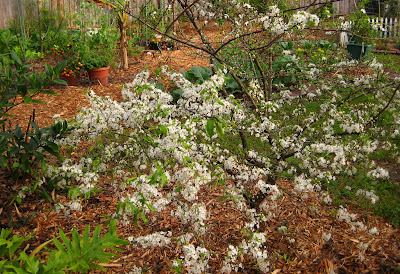 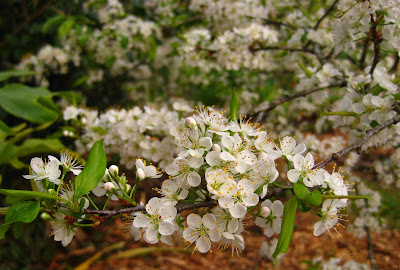 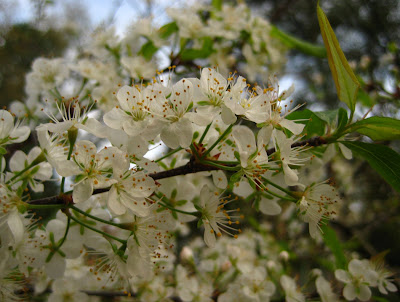 I was given this bushy little tree, and told that it was a Chickasaw plum... but I've long suspected that it was misidentified, mostly because its growth habit is so low and weedy. I'm pretty sure now that it's Prunus umbellata, the Flatwoods Plum. After blooming in February, these trees produce small, fairly bitter little fruits. A couple of years ago the trees in this area produced a prolific harvest, and I picked a bunch with my son from neighbors' trees. We filled a few buckets, and made a tart and jelly from them. I think the trees are highly variable, and some trees have fairly sweet fruit while others' fruit is sour or bitter. Anyway, the best use for them is jelly, which you can sweeten until the bitterness and sourness is no longer perceptible. 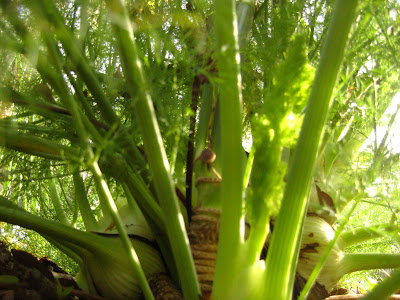 Florence Fennel. This bunch is over a year old. It suffers a bit in the heat and humidity, but produces bulbs pretty readily during the cool season. I like the fronds (in salads) almost as much as the bulbs.
Posted by Michael at 9:15 AM

I've been wondering what that tree was for years, thanks for identifying it. beautiful blog you have.

Your fennel and other veggies and herbs look lovely. My kitchen garden bed is now getting going-I have 8 inch fennel seedlings and I am also snipping them for salads etc.

The tart edible fruits of Prunus angustifolia and Prunus umbellata are ripe and ready for wild foraging.Tn Tree Farm Nursery