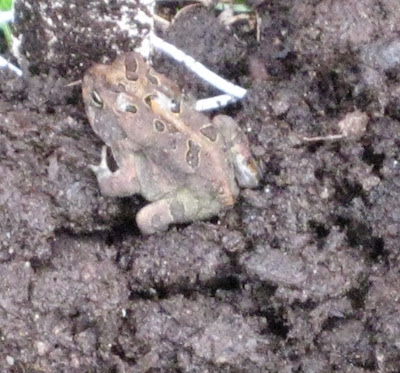 The boy & I started planting his half of the kids' garden. Our timing was off, but the boy was really excited about starting his garden, so we planted anyway and can hope for the best. We're a bit early for the 'Bright Lights' Swiss Chard and the 'Summer Glory' lettuce blend (Parks); and a bit late for the 'Miniature White' cucumbers.

For the first time, I used some shade cloth over the greens. Maybe that will allow us to sneak the plants into fall without summer's noticing. The cukes are marked forty-nine days, giving us a good chance at harvesting some before our likely frost date around the end of November.

I've been busy at work (I have to get rid of that job thing), so instead of growing my own from seed, I purchased some tomato seedlings from Nize, my friend and local organic grower. Don't get me wrong -- I was ready with a bunch started indoors. But the darn cat ate them. And the dirt they were growing in. And then vomited them everywhere. But mostly on the furniture.

Sometimes it's hard to love the cat.

Anyway, I couldn't find time to replant, and it's probably too late to start now. So, I bought some small, organic seedlings. In my own plot, I put some 'Purple Cherokee', 'Roma' and 'Better Boy' into my grow holes filled with mushroom compost.

I should quickly run down what's blooming well in my garden...
Posted by Michael at 3:29 PM